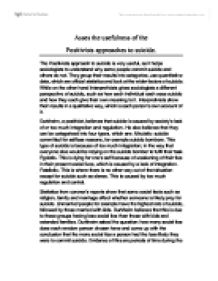 Asses the usefulness of the Positivists approaches to suicide. The Positivists approach to suicide is very useful, as it helps sociologists to understand why some people commit suicide and others do not. They group their results into categories, use quantitative data, which are official statistics and look at the wider factors of suicide. While on the other hand Interpretivists gives sociologists a different perspective of suicide, such as how each individual each sees suicide and how they each give their own meaning to it. Interpretivists show their results in a qualitative way, which is each person's own account of it. Durkheim, a positivist, believes that suicide is caused by society's lack of or too much integration and regulation. He also believes that they can be categorised into four types, which are: Altruistic- suicide committed for selfless reasons, for example suicide bombers. This type of suicide is because of too much integration; in the way that everyone else would be relying on the suicide bomber to fulfil their task. ...read more.

problems in his research such as it's the coroner's that decide whether or not a death is a suicide and what is to say that they don't make mistakes which deems their results as inaccurate and invalid. Another criticism is that there is no main social fact that is continually linked with suicide so it's down to each person's own individual thoughts on suicide which makes it immeasurable as it means something different to everyone. These criticisms show that although Durkheim's research showed a good insight to suicide it has been proved to be invalid and unreliable. Interpretivists on the other hand believe that suicide is more about how each individual defines and gives meaning to their action though use of clues found at the crime scene such as suicide notes the and/or inspection into diaries of the victims. Douglas found that there are five patterns of meanings, which are: Revenge suicide- This is the victim making someone who would be affected by their death guilty for some wrong doing they have done like an ex-boyfriend. ...read more.

He fails to define how come all coroner's have this common sense theory where all there meanings of suicide come from. For example a coroner could class a death as a suicide using evidence of other cultures having done the same thing. Barry Hindess (1973) argues that if statistics mirror the interpretations of coroners then research findings would be based on sociologists interpretations, which means there would be no point in studying anything as there would never a possibility of an objective knowledge of society, which would make the research weak as everyone knows that there are topics worth studying in all areas in life, not just sociological. In conclusion the evidence shows that both Positivists and Interpretivists show a good insight into suicide in the way they each look into areas of their own but in my opinion I believe that the Interpretivists show a better understanding of suicide as they focus on individuals and also look out other factors while Positivists only focus on wider factors of suicide. This shows that Interpretivists have a more sound research that is valid. ...read more.