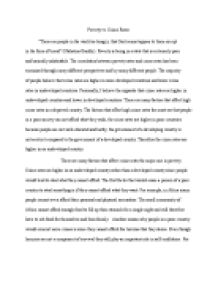 The teachers have probably also committed crime in their life. This would cause the teachers with wrong knowledge to teach their students the same knowledge they have. For example, if a teacher has the knowledge that crime and theft is alright and acceptable this teacher would teach their students that theft and crime is acceptable then the students would go off thinking it?s okay and possibly even commit crimes. Another reason that affects higher crime rates in an uneducated country is due to the parents of the students that are also not well educated and are therefore not a good role model towards their children. The children learn these horrible things by their parents. Since each family has their own values the children consider these crimes to be acceptable. For example, the parents of a poor family would probably have to rob clothing for their children. When the children realize that their parents stole clothing for them they will follow their parents and do the same. Additionally, the government systems of poor countries are much less strict towards crimes. Such as, the police control officers don?t carry many weapons and devices since they cannot afford them. ...read more.

Thirdly, since the government system is very weak and not so strict in comparison to the government system of a developed country. Due to the fact that the government system is not strict in a poor country the populations of that poor country feel that it is easy to get away with committing a crime. Also, since the police force is less committed to their duty they become bribed very easily especially with money. Additionally, since the laws and punishments of an undeveloped country are not strict the community commits crimes easily. Overall, it is proven that the crime rates are much higher in a more undeveloped country. Works Citied Bennett, William J., John J. DiIulio, and John P. Walters. Body count: Mora; poverty--and how to win America's war against crime an drugs. New York: Simon & Schuster, 1996. Print. Ross, Sherwood. "OpEDNews- Page 2 of Article: Why Poverty Spreads Across America." Opednews.com Progressive, Liberal United States and International News, Opinion, Op-Eds and Politics. N.p., n.d. Web. 25 Sept. 2012. <http://www.opednews.com/articles/2/Why-Poverty-Spreads-Across-by-Sherwood-Ross-101127-299.html>. Short, James F.. "Crime and Society. "Poverty, ethnicity, and violent crime. Boulder, Colo.: WestviewPress, 1997. 220-245. Print. Taylor, Blake. "Poverty & Crime - Fundamental Finance." Fundamental Economics. N.p.,n.d. Web. 30 Sept. 2012. <http://economics.fundamentalfinance.com/povertycrime.php>. Poverty vs. Crime Rates Essay By: Mariam Mirza For:Mrs.Rowley HSP 3M October 25,2012I ...read more.