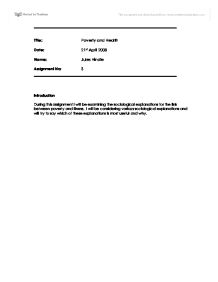 Title: Poverty and Health Date: 21st April 2008 Name: Jules Hindle Assignment No: 3 Introduction During this assignment I will be examining the sociological explanations for the link between poverty and illness. I will be considering various sociological explanations and will try to say which of these explanations is most useful and why. According to Taylor et al (2005, Pg 188) sociologists differ over how poverty should be defined and measured, such differences depend on their views of welfare provision and social inequality. These differences are generally divided into two definitions; absolute and relative poverty. The term 'absolute poverty' was developed over one hundred years ago and is defined according to an absolute minimum standard of living. It is based on the belief, coined by Seebohm Rowntree in 1899, that all human beings have the same essential basic needs in order to stay healthy; poverty is defined as the physical lack of these basic needs such as food, clothing and shelter (Taylor et al, 2005, Pg 171). It is generally measured by pricing these basic necessities, drawing a poverty line at this price and then defining poverty as those whose income falls below this line. ...read more.

Women are more likely to be unable to work through having to look after children especially considering that 96% of lone parents on income support are women, those that are able to work are generally paid less than men. Poverty within ethnic minorities is also an issue with twice as many black people being unemployed than white, and on average earning less per week. Immigrants can also suffer as state pensions are only available to those who have been resident in the UK for twenty years. Inequalities in health The above graph shows that for the period 1997-99, life expectancy at birth in England and Wales for males in the professional group was 7.4 years more than that for those in the unskilled manual groups. The graph above shows that there were substantial variations in reported health status by social group. Among those in employment, rates of not good health for people in routine occupations were more than double those for people in higher managerial and professional occupations (8.6 per cent and 3.4 per cent respectively). Those who had never worked or were long-term unemployed had even higher rates of not good health (18.5 per cent). ...read more.

all contributed to the early death of workers (cited Haralambos & Holborn, 2004, pg 314). Jobs can be dangerous and lead to accidents in the workplace. Respiratory diseases are common amongst construction workers and chemicals and asbestos have been known to cause work related cancers and illnesses (Haralambos & Holborn, 2004, pg 315). Material ownership also affects those on lowers income as supermarkets selling cheaper food can often only be accessed by those with cars, resulting in those on lower incomes having to pay a premium at local shops. These, and other factors, can lead to a lower quality of life and a higher mortality rate. Critics would say that a purely structural explanation ignores individual choice and labels them as the puppets of the society. All four explanations suggest that, generally, the higher up the social class you are the better your health is likely to be. I would argue that it is a combination of both cultural and structural explanations that cause the differences in health modern British society. Low incomes and lack of material assets can force people in similar circumstances together, forming social groups. Within these groups cultures are formed, creating norms and values within. Poor quality housing, bad diet, lack of exercise, smoking and drinking can come about by lack of material wealth and are accepted as the norm within lower class cultures. ...read more.