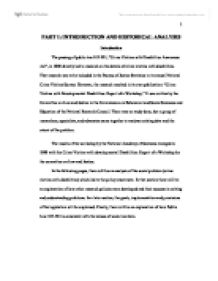 PART I: INTRODUCTION AND HISTORICAL ANALYSIS Introduction The passing of public law 105-301, "Crime Victims with Disabilities Awareness Act", in 1998 directly led to research on the details of crime victims with disabilities. That research was to be included in the Bureau of Justice Statistics in its annual National Crime Victims Survey. However, the research resulted in its own publication: "Crime Victims with Developmental Disabilities: Report of a Workshop." It was written by the Committee on Law and Justice in the Commission on Behavioral and Social Sciences and Education of the National Research Council. There was no study done, but a group of researchers, specialists, and advocates came together to analyze existing data and the extent of the problem. The results of the workshop by the National Academy of Sciences emerged in 1999 with the Crime Victims with developmental Disabilities: Report of a Workshop by the committee on Law and Justice. In the following pages, there will be an analysis of the social problem (crime victims with disabilities) which led to the policy enactment. In that section there will be an explanation of how other research policies were developed and their success in solving and understanding problems. In a later section, the goals, implementation and provisions of the legislation will be explained. Finally, there will be an explanation of how Public Law 105-301 is consistent with the values of social workers. History of Crime Victim Research The history of criminal statistics begins in 1880 (Robinson). There were statistics prior to that time called "statistics of crime" that were collected in the 1850, 1860, and 1870s censuses. The Secretary of the Interior was in charge of carrying out the provisions of gathering crime statistics. The United States marshals, however, performed the collection of the statistics. Four questions were included in the census related to crime. They enquired about the number convicted of crime during the year ending June 1, 1850, the number imprisoned at that time, the nativity and the color of their native born. ...read more.

Forms of victimization include but are not limited to, sexual assault, assault, neglect, child abuse, murder, and domestic violence. PART II: POLICY DESCRIPTION P.L. 105-301 expressed its goals within the text of the legislation. There were three. They are: "1. to increase public awareness of the plight of crime victims with developmental disabilities; 2. to start collecting data to measure the extent and nature of the problem; 3. to develop strategies to address the safety and justice needs of these victims." (Thomas, 1998) According to the text of the legislation (P.L. 105-301) the policy implementation was directed toward the Attorney General, who was in charge of conducting the study. There were issues that were supposed to be addressed in the study. They were: (1) the nature and extent of crimes against individuals with developmental disabilities; (2) the risk factors associated with victimization of individuals with developmental disabilities; (3) the manner in which the justice system responds to crimes against individuals with developmental disabilities; and (4) the means by which States may establish and maintain a centralized computer database on the incidence of crimes against individuals with disabilities within a State." (Thomas, 1998) The issues were addressed in the CVWDD: Report of a Workshop. It was suggested that the Attorney General consider contracting with the Committee on Law and Justice of the National Research Council of the National Academy of Sciences to conduct the research. The provisions stated the results needed to be submitted to the Committees on the Judiciary, in both the House of Representatives and the Senate, no later than 18 months after the date of enactment of the act. The short-term goal was to conduct the research. This was not achieved because the National Research Council and the U.S. Department of Justice agreed that the best way to fulfill the mandate from P.L. 105-301 was through a workshop rather than studies. It brought together a group of experts, from researchers to advocates for the developmentally disabled and discussed the "state of knowledge in this area and highlight gaps in the research." ...read more.

measure the extent and nature of the problem, would inform the general public and officials that there is an injustice in the system. That is the first step to provide social justice. By showing there is a problem, the need for change is addressed. Those in charge start asking questions like, "why is there are problem here? What is the problem? How can we fix it?" Some times that will lead to a solution to the problem or a better way to react to the problem when it occurs. The solution, in this case, is informing those who directly work with crime victims with developmental disabilities. By informing those involved of the potential problems associated with crime victims with D.D. or training those involved how to better communicate and advise a crime victim with D.D., his/her dignity and self worth are preserved. Goal No. 3, to develop strategies to address the safety and justice needs of these victims, also directly relates to social justice. All three goals address a bigger picture. Together, those goals, if implemented properly, will affect the victim's ability to maintain self-determination. A crime victim, with our without disabilities, has his/her dignity, self worth, and self-determination compromised. But the difference is crime victims without disabilities often have the ability to understand that they are not at fault for the victimization. If a first-response caregiver (law enforcement, psychiatrist, nurse, doctor, or social worker) doesn't support, believe, and encourage justice, a victim with developmental disabilities may not understand that. If knowledge is power, knowing how to deal with these situations will empower the first-response workers to empower the victims they serve. Table of Contents 1. Part I: Introduction 1 2. Part I: History of Crime Victim Research 2 3. Part II: Policy Description 7 4. Part III: Policy Analysis 9 5. Part III: Political Feasibility 9 6. Part III: Administrative Feasibility 9 7. Part III: Question 1 & 2 10 8. Part III: Question 3 11 9. Part III: Question 4 12 10. ...read more.