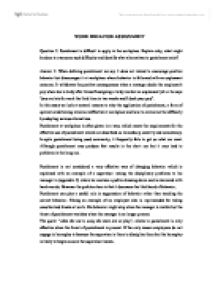 Punishment is difficult to apply in the workplace. Explain why, what might be done to overcome such difficulty and identify what alternatives to punishment exist

WORK BEHAVIOR ASSIGNMENT Question 2. Punishment is difficult to apply in the workplace. Explain why, what might be done to overcome such difficulty and identify what alternatives to punishment exist? Answer 2. When defining punishment we say it does not intend to encourage positive behavior but discourages it at workplace where behavior is followed with an unpleasant outcome. It withdraws the positive consequences when a manager docks the employee's pay when she is tardy after himself assigning a tardy worker an unpleasant job or he says "you are late for work the third time in two weeks and I dock your pay". In this essay we look at several reasons to why the application of punishment; a form of operant conditioning remains ineffective at workplace and how to overcome the difficulty by adapting various alternatives. Punishment at workplace is often given in a way, which meets the requirements for the effective use of punishment which are described as immediacy, severity and consistency. In spite punishment being used commonly, it frequently fails to get us what we want. Although punishment may produce fast results in the short run but it may lead to problems in the long run. Punishment is not considered a very effective way of changing behavior which is explained with an example of a supervisor raising the disciplinary problems to his manager in (appendix 2) where he receives a public dressing down and is showered with harsh words. ...read more.

Looking at an example where a boss does not fire his peon for entering office five minutes late few times a month and if his secretary takes two weeks to hand a letter marked, "Urgent," he doesn't let her off with a "Gee, be more careful, OK?" Sometimes managers in workplace punish their staff keeping revenge in mind and with venting frustration. Punishment should be tied to a specific act and focus on it as well. For managers correcting the behavior, not the person leads to getting better results. Taking an example of getting anything done in a large organization involves the intelligent management of various pinpointed activities just as much as it does the management of the people doing those activities. And it's a lot easier to focus on the activities - the Behaviors - being performed than to correct the "deviant" or "defiant" personalities of the actors. Looking at another example of punishing the undesirable behavior not the person is not to say "you have a bad attitude" but rather "not being at your desk is causing major problems". The only way to reduce ineffective behavior at workplace in long run is to apply punishment consistently that is "Be Consistent across person and across time". Managers in a working area are often inconsistent; they need to be consistent even though consistency is hard to manage. Punishment must be administered in a way that it informs people of what went wrong and also they must change to do right. ...read more.

Response-cost this is the removal of a specific reinforcer following the occurrence of a problem behavior. Punishment can further be of two types, Intrinsic and Extrinsic. Intrinsic punishment is punishment that is an inherent (naturally built-in) aspect of the behavior that is being punished. Example: You use a knife improperly and get a nasty cut or you smoke a cigarette and it makes you cough. Extrinsic punishment is punishment that follows the behavior but is not a natural part of that behavior. Example: You say something your grandmother doesn't like and she grabs the cookie out of your hand or you smoke a cigarette and someone makes a negative comment. People who punish are known as punishers and they can either be primary or secondary. Primary punishers are those that we find naturally punishing and secondary punishers are those that are punishing because they have become associated with some other punisher. APPENDIX 2 A supervisor raises the issues of disciplinary problems which he had faced, in a meeting and the wrong decision taken by him while supervising his staff. At first he was provided with diplomatic assistance from his manager of how he could solve his problems in the near future but later on the manager becomes frustrated, he loses his temper and the supervisor is punished with harsh words and a public dressing down. For the next few months the supervisor does not arise any of his problems and the manager thought that his way worked. Later the manager is confronted with a deputation from employees of the supervisors department who inform him of the intolerable working conditions. . ...read more.