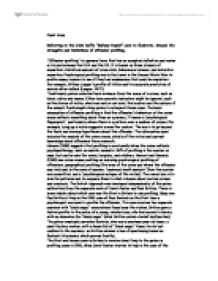 Referring to the John Duffy &quot;Railway r****t&quot; case to illustrate, discuss the strengths and limitations of offender profiling.

Cassi Axon Referring to the John Duffy "Railway r****t" case to illustrate, discuss the strengths and limitations of offender profiling. 'Offender profiling' is a general term that has no accepted definition and varies in its use between the USA and the UK. It is based on three strands of expertise: statistical analysis of crime data, behavioural science, and detective expertise. Psychological profiling was in fact used in the Second World War to profile enemy leaders to see if they had weaknesses that could be exploited - for example, William Langer's profile of Hitler and his accurate prediction of suicide after defeat (Langer, 1972). Traditionally police collected hard evidence from the scene of a crime, such as blood, saliva and s***n. Other less concrete indicators might be ignored, such as the choice of victim, what was said or not said, the location and the nature of the assault. Psychologists help police to interpret these clues. The basic assumption of offender profiling is that the offender's behaviour at the crime scene reflects something about them as a person. It leaves a 'psychological fingerprint,' particularly where there is a pattern over a number of crimes. For example, tying up a victim suggests a need for control. The aim is to go beyond the facts and develop hypotheses about the offender. The information used includes the analysis of the crime scene, details of the victim and current knowledge about offenders from research. Holmes (1989) suggests that profiling is most useful when the crime reflects psychopathology, such as s******c assaults. ...read more.

This type of offender believes he is developing some type of relationship with the victim, and mistakenly believes, the s****l assault produces intimacy. 2. Victim as object - blindfolding and/or gagging the victim, while the offender tends to be disguised. The offender is concerned most with control in the interaction of the r**e. The woman is seen as a dangerous object that must be 'trussed and coerced' (Canter, 1994). 3. Victim as vehicle - violence (both physical and verbal), which demeans the victim. The actions here are a reflection of the offenders anger. This emphasis on statistical patterns has led to the creation of a database called CATCH'EM (Central Analytical Team Collating Homicide Expertise and Management). The database contains details of over 4,000 child murders, which allows police officers to make statistical predictions about the killer. For example, 62% of killers of females under seventeen are single, but 83% if the victim is male and under sixteen. If the child's body is found without s****l interference, there is around a 70% likelihood that the killer is the guardian or parent, but when there is s****l interference, this figure drops to 1% -2 % (Murder in Mind, 1993). In the UK there seems to have been some resistance to profiling by the police because psychologists have been viewed as 'outsiders' and not being able to offer anything more than what a could practitioner (eg, detective) could. Geberth (1983) feels that 'experts' have very little to say compared with what experienced police officers are likely to work out for themselves. ...read more.

We should also be aware of the danger of the self-fulfilling prophecy with respect to profiling. Detectives should bear in mind that a profile may well fit a number of people and may not be totally accurate. The fact that a suspect happens to fit the profile does not 'prove' that they committed the offence. There may be several people who share the suspect's make-up and so the police should be cautious before making a presumption of guilt. This issue is most likely to be created because psychologists will tend to work on probabilities whereas police may be more likely to operate in absolute terms of guilt and innocence. The danger is that once a person has been labelled as a suspect and brought in for questioning, the police will make a presumption of guilt and see their role as merely to elicit a confession. There is little good scientific research to which one can turn in trying to answer the question of how useful profiling is. Success or failure are not so easily measured when one is dealing with the sort of material used in profiling. If a profiler's information proves to be 50% accurate and 50% inaccurate should this be counted as a success or a failure? In addition if any information provided by a profiler is used that helps in catching a criminal is this success, even if the rest of the information provided was useless? A related issue to this is that profile details may only be considered as useful if it provides a type of detail, which the police could not have reasonably deduced, for themselves. ...read more.