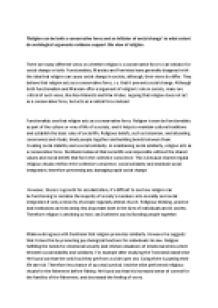 Religion can be both a conservative force and an initiator of social change to what extent do sociological arguments evidence support this view of religion.

He calls this ?the opium of the people?. Marxists believe that religion which eases the pain of oppression and exploitation in 3 main ways. Religion makes Working class believe that suffering in this life is ok because they will be rewarded later. this prevents proletariat from wanted to change. (Compensation). Religion encourages people to accept their position because of the fear of being punished if they didn?t follow instructions can encourage not act to change society. (Social control) and Religion provides a religious reasonable explanation and for inequality. For example, the Hindu religion provides a religious justification for the inequalities of the Indian caste system and an individual?s position in the social hierarchy. Therefore, religion teaches to respect those in power (Agent of legitimation). However, like Functionalism, Marxism fails to consider secularisation. The ideological power of religion is undermined by the fact that less than 10% of people attend church. Therefore Religion is not a form of social control and does not keep things traditional. Many sociologists argue that there have been many examples of religious movement proving that religion bought about radical social change. ...read more.

They believe that by working, they are worshipping god. This ascetic life would demonstrate Gods favour and therefore you ultimate place in heaven. Weber argued that these idea helped initiate western economic development through the industrial revolution and capitalism and therefore create social change. Weber suggests religions and other authority take one of two forms. One form is a charismatic leader in which people obey a religious leader because of their personal qualities e.g. Jesus. Another form is traditional, in which those who exercise a tradition and support the preservation and continuation of existing values and social ties. These authorities give orders and expect to be obeyed. For example, In 1979 the Shah of Iran was deposed by a revolutionary Islamic group led by the Ayatollah Khomeini who opposed the westernisation of Iran. Khomeini was quick to set up a model Islamic state based on ancient Sharia law. In conclusion, religion can be both a conservative force and an initiator of social change. This essay contained information on functionalists, feminists and Marxists and their argument that religion is a conservative force although they differ from each other. On the other hand, Neo-Marxists and Max Weber saw religion as a force for social change. ...read more.