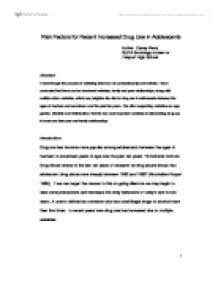 Risk Factors for Recent Increased Drug Use in Adolescents.

Risk Factors for Recent Increased Drug Use in Adolescents Author: Casey Perry SUPA Sociology student at Fairport High School Abstract: I went through the process of obtaining data from six professional journal articles. I have concluded that there are two dominant variables, family and peer relationships, along with multiple other variables; which may heighten the risk for drug use in adolescents between the ages of fourteen and seventeen over the past ten years. The other supporting variables are age, gender, ethnicity and victimization. But the two most important variables in determining drug use in teens are their peer and family relationships. Introduction: Drug use has become more popular among adolescents between the ages of fourteen to seventeen years of age over the past ten years. "A National Institute Drug Abuse review of the last ten years of research on drug abuse shows that adolescent drug abuse rose sharply between 1992 and 1996" (Alcoholism Report 1998). If we can target the causes to this on going dilemma we may begin to take some precautions and decrease the risky behaviors of today's and future teens. A user is defined as someone who has used illegal drugs or alcohol more than five times. In recent years teen drug use has increased due to multiple variables. ...read more.

If a teen has a positive relationship with his parents who support him, he will be less likely to use drugs. The support will increase his self-esteem, which in turn will not force the child to turn to his peers, who may use, for support. But, negative relationships, consisting of multiple conflicts, between parents and adolescents will lead to the adolescent's deviant behavior and drug use. Poor relationships increase chances of teens obtaining these deviant behaviors, and associating with deviant peers. Drugs are a way for teens to cope with this parent-adolescent conflict. Mothers play a much more significant role in the lives of adolescents. Their relationship with their mom has a greater influence that with their father. "Studies that have examined associating between adolescents abstinence from drug use and maternal affection" (Farrell, White 1998). If a mother displays rejection toward her son or daughter there is a high level of possibility that they will begin problematic drug use. A parent's ability to moderate the peer influence on their child and put more emphasis on their own norms and values is a protective factor on their teen. On the other hand if parents are influencing poor norms and values and are drug users themselves the risk for use will rise because the adolescent has been thought its ok. ...read more.

Other contributing factors were ethnicity and gender and victimization. Although they were just minor variables, to a group sample they can severely effect an individual behavior. Peer and family relationships are the two more influential variables in an adolescent's life. If his/ her relationships with either of them are inadequate it can cause drug-affiliated problems. The effects of the parent- adolescent relationships, maternal affection and parental norm influence are directed towards the drug use in adolescents. "The relationship between disruptive family relationships and deviant behavior among adolescents, including drug use, is well recognized" (Bhattacharya 1998). Parents can influence whom their child does or does not associate with. If they do not monitor their peers, they may end up affiliating with the deviant crowd, who can then in turn influence drug use. Gender, ethnicity and victimization are variables that can not be altered to a certain degree but do effect the risk of drug use in adolescents. Males are at greater risk for alcohol and marijuana use, over females. An individuals ethnicity can also play a role in drug use. Whether you're Caucasian, African American, Chinese or Mexican, your ethnic background can influence your choice to use or abuse drugs. Victimization is another variable, because as a result of an assault or violent act an individual may feel they need to turn to drugs as a way to cope with the pressures, and to forget about the incident. 9 1 ...read more.