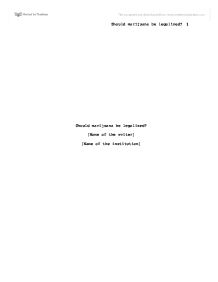 Should marijuana be legalized

Should marijuana be legalized? [Name of the writer] [Name of the institution] Should marijuana be legalized? The Constitution gives the right to the people to make their own decisions which should not be influenced or altered by the government. Smoking is a health risk whether it is tobacco or marijuana but the government has made a decision on which is illicit and licit. People are allowed to skydive, drive cars, and drink alcohol which all has many known health risk but is not shunned upon by government or society (www.balancedpolitics.org). Sure, smoking marijuana does put others at minimal risk through second hand smoke and the user's actions towards others, but similar outcomes could occur with the abuse for alcohol and tobacco. This is why the abuse of the drug such as driving while under the influence should remain illegal. The legalization of marijuana should be based on the health risks compared to tobacco and alcohol; and the benefits in the health field. ...read more.

Doctors state that marijuana is beneficial for people who have multiple sclerosis saying that it relaxes the muscles and decreases pain and plasticity in the spinal cord(www.environmentalgraffiti.com). Alcohol is legal drug that is abused daily that has a proven greater health risks to the abusers and the people that are victims to their abuse . The leading cause of death is from alcohol related car accidents in young adults. Around 50,000 people die each year from alcohol poisoning. Similarly, more than 400,000 deaths each year are attributed to tobacco smoking. By comparison, marijuana is non-toxic and cannot cause death by overdose. NIDA says that autopsies reveal that 75 people per year are high on marijuana when they die, but this does not mean that marijuana caused or was even a factor in their deaths, and based all of these conclusions on the U.S. Government Bureau of Mortality Statistics (www.environmentalgraffiti.com): Tobacco...............................340,000 - 395,000 deaths Alcohol (excluding crime/accidents).............125,000+ deaths Drug Overdose (prescription)............24,000 - 27,000 deaths Drug Overdose ...read more.

Besides the fact that the government is losing out on a lump sum of tax money, the government spends an incredible amount to keep marijuana illegal. Some of the expenses are: cost of active law enforcement, cost of prosecution of accused offenders, cost of incarceration of convicted offenders, cost of (publicly funded) anti-drug education and propaganda, hundreds of millions of dollars in tax revenue that would be generated if drugs were legal and taxed, public cost of funerals for police officers killed in sting operations, cost of foster care and social services for children of incarcerated offenders(www.environmentalgraffiti.com). Society as a whole will continue to identify marijuana as a drug that impairs the thinking of an individual and causes harm to their well being. Although marijuana may not be legalized in the near future, it is apparent that there is really no reason to condemn weed without looking at factual information, just say it is not your preference. ...read more.