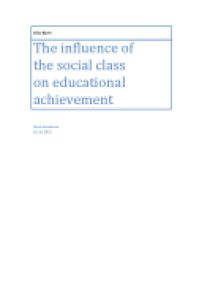 ﻿John Barry The influence of the social class on educational achievement Alina Antonova 18.10.2012 ________________ The influence of the social class on educational achievement There are considered to be three social classes: upper class, middle class and working class. Many scientists believe that social class differences influence educational achievement. The Bourdieu?s theory of class distinction is one of the improvements of this idea. It was described in his book ?La Distinction? and translated into English by Richard Nice in 1984. Bourdieu claims that aesthetic choices both create class-based social groups or ?class fractions?, and actively distance people from one class to another. He argues that dominant groups have more affluent cultural capital, which is personified in schools. So, students with such cultural capital use it to increase educational resources in the form of qualifications. Whereas, students from the lower classes are consequently disadvantaged and they have to increase their cultural capital to get a good job. So, all advantages and disadvantages below will show how social class influence educational achievement. Cultural Deprivation Cultural deprivation is a popular theme to argue between scientists. It only can be decided that somebody ?culturally deprived? by having a clear idea of what is normal in society. ...read more.

?The belief that race accounts for differences in human character or ability and that a particular race is superior to others.? 2) ?Discrimination or prejudice based on race.? Both of them refer to encroach on the person?s rights. This also includes negative stereotypes that members of a certain group are aggressive or appalling. Usually it causes by non-acceptance of cultural differences. One Britain study revealed that in the majority of school white people were more likely to be put in GCSEs than Asian or African offspring. While children from the work background were put to the lower sets. David Gillborn?s research (1990) proves it. He spent two years studying comprehensive school and interviewing teachers as well as students. Gillborn revealed that the majority of teachers perceived students differently. For instance, African-Carribean students are always evaluated worse than others. Consequently, they know teachers? attitude towards them in advance and achieve not as well as other pupils. They were often aggressive and out of control. ?Boys are often in the lower sets due to the behavior, not because of knowledge and it is unfair?,-telling Mac an Ghail. One more substantial problem which children facing are understated grades. ...read more.

Whereas middle class students are more social, have better speech patterns and are active in their studies. School for them is considered as a ?second home? because they were prepared at home by their parents and have a solid school foundation. Middle class parents are more interested in their children?s education and are more likely to be involved in their way of thinking. Upper class parents essentially do not involve themselves in their children?s school life. Reay argues this is due to the fact that they have enough money to afford personal tutors or private education for their offspring. Conclusion In conclusion, there are many effects of social classes on children?s educational achievements. As it can be seen, middle class families have the most involved parents. They are always trying to take care of their children; to make their school life easier and enjoyable. Whereas parents from the upper class are slightly different and do not pay deep attention to the achievements of their children. Due to these different backgrounds, social classes and cultural capitals children face a lot of difficulties in education. Nevertheless, it is doubtful that society will be changed, but governments should try to prevent evaluating children by their nationalities and treat everybody as an equal individual. ...read more.