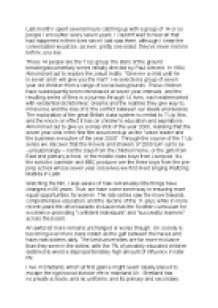 Social inequality in schools: how can teachers redress the balance?

﻿Last month I spent several hours catching up with a group of 14 or so people I encounter every seven years. I couldn't wait to hear all that had happened in their lives since I last saw them, although I knew the conversation would be, as ever, pretty one-sided: they've never met me before, you see. These 14 people are the 7 Up group: the stars of the ground breakingdocumentary series initially directed by Paul Almond. In 1964 Almond set out to explore the Jesuit motto: "Give me a child until he is seven and I will give you the man". He selected a group of seven year old children from a range of social backgrounds. These children have subsequently been interviewed at seven year intervals, and the resulting series of films is a journey through 14 lives; each watermarked with existential dichotomies: dreams and the realities they give way to, innocence and the loss of it; the conflict between our ideals and desires. ...read more.

Watching the film, I was aware of how remarkably little things have changed in 56 years. True, we have come some way in ensuring more equal opportunities for women. The late sixties saw the move towards comprehensive education, and the decline of the 11-plus, while in more recent years the drive towards inclusion has the Scottish curriculum for excellence promoting "confident individuals" and "successful learners" across the board. An awful lot more remains unchanged or worse though. UK society is becoming ever more class ridden as the gulf between the haves and have-nots widens daily. The best universities are far more exclusive than they were in the sixties, with the 7% of privately educated children destined to wield a disproportionately high amount of influence in later life. I live in Shetland, which at first glance might seem ideally placed to escape the rigid social division rife in mainland UK. ...read more.

Raising awareness of economic inequality within the classroom is also important. There are some interesting ideas and activities on biz/edwhich can be adapted to suit the ages of your learners. Clearly, this has to be approached in a manner which will not deepen divisions in the class. I try to think about learners' social and economic backgrounds when selecting classroom topics and setting homework. How do certain topics advantage children from more affluent backgrounds? My son's nursery recently did a topic on holidays and the class were asked to bring in photos from home. Cue a wall display of photos which broadcast the group's inequality in glorious Technicolor. Finally, as teachers we need to be aware of where our learners are coming from. What do they dream of becoming? How can you help them to achieve this? We need to encourage them to voice their aspirations from an early age, and then work as a class, as a school, and as a society to ensure that our aspiring leaders of 2050 are given a fair chance. ...read more.