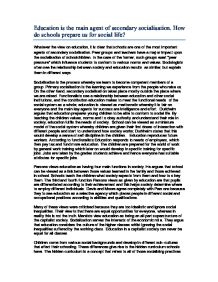 Education is the main agent of secondary socialisation. How do schools prepare us for social life?

Education is the main agent of secondary socialisation. How do schools prepare us for social life? Whatever the view on education, it is clear that schools are one of the most important agents of secondary socialisation. Peer groups and teachers have a major impact upon the socialisation of schoolchildren. In the case of the former, such groups exert "peer pressure" which influence students to conform to various norms and values. Sociologists often see the relationship between society and education results as similar, but explain them in different ways. Socialisation is the process whereby we learn to become competent members of a group. Primary socialisation is the learning we experience from the people who raise us. On the other hand, secondary socialisation takes place mostly outside the place where we are raised. Functionalists see a relationship between education and other social institutions, and the contribution education makes to meet the functional needs of the social system as a whole; education is viewed as meritocratic whereby it is fair on everyone and the main key agents for success are intelligence and effort. ...read more.

Their view is that there are equal opportunities for everyone, whereas in reality this is not the truth. Marxists view education as being an all part superstructure of the capitalist society. Socialization serves the interests of the economic role. They argue that education considers the culture of the higher classes whilst ignoring the social inequalities suffered by the working class. Education in a capitalist society can never be equal for all classes. Children come from various social backgrounds and develop in different sub-cultures that affect their schooling. These differences give rise to the hidden curriculum schools have. The hidden curriculum is a concept that refers to all of those socialising practices that are not included in the official curriculum but that contribute toward the reproduction of society's culture including the knowledge, attitudes and beliefs a certain society has. The hidden curriculum was criticised mainly by Bowles and Gintis (Marxists) for making students passive and accept everything authority states instead of having active criticism. The knowledge given to the students is beyond their concern and they should accept it. ...read more.

Stephen J. Ball introduced his study on streaming by giving three bands in which children would be categorised; Band 1 - The most able, Band2 - average ability, Band 3 - least able. The selections were based on the father's occupation. This study conveys that there is a strong bond between 'banding' and performance in school. This portrays that the parents of students have a role in their children's academic success. Everyone is given the opportunity to achieve success but those that have parents in higher jobs or classes in society have a tendency of continue further on with their studies in contrast to children whose parents fall into the working class position; this is because one is motivated to achieve success and usually has more support to continue on with his/her education. Education is the main agent of secondary socialisation because it prepares us for the world of work. Though there are a lot on inequalities and conflicts in the system because of capitalism, one must accept that without education, a child has merely no chance of having a future in today's demanding society. ?? ?? ?? ?? ...read more.

This essay has some good knowledge and understanding - the section on Functionalism in particular is well written. There is however a distinct lack of critical analysis from the likes of Feminism in particular but also in comparison to other secondary agents of socialisation. Overall mark: ***