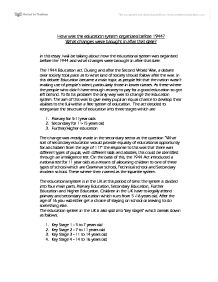 How was the education system organized before 1944? What changes were brought in after that date?

How was the education system organized before 1944?

What changes were brought in after that date?

In this essay I will be talking about how the educational system was organised before the 1944 and what changes were brought in after that date.

The 1944 Education act. During and after the Second World War, a debate over society took pace as to what kind of society should follow after the war. In this debate Education became a main topic as people felt that the nation wasn’t making use of people’s talent, particularly those in lower classes. As these where the people who didn’t have enough money to pay for a good education so got left behind. To fix his problem the only way was to change the Education system. The aim of this was to give every pupil an equal chance to develop their abilities to the full within a free system of education.  The act decided to reorganize the structure of education into three stages which are

The change was mostly made in the secondary sector as the question “What sort of secondary education would provide equality of educational opportunity for all children from the age of 11?” the response to this was that there was different types of pupils, with different skills and abilities, this could be identified through an intelligence test. On the basis of this, the 1944 Act introduced a national test for 11 year olds as a means of allocating children to one of three types of school which are Grammar school, Technical school and Secondary modern school. These where then named as the tripartite system.

The educational system is in the UK at this period of time: the system is divided into four main parts, Primary Education, Secondary Education, Further Education and Higher Education. Children in the UK have to legally attend primary and secondary education which runs from 5 -16 years old. After the age of 16 you will either get a choice of staying on school or leaving to do something else.
The education system in the UK is also split into "key stages" which breaks down as follows:

Key Stage 1 and 2 is usually undertaken at primary school then after the age of 11 you would move onto Secondary School until 16. Students are assessed at the end of each stage. The most important assessment occurs at age 16 when students pursue their GCSE's, Once students complete their GCSE's they have the choice to go onto further education and then potential higher education, or finish school and go into the working world.

I will end this essay by concluding that I believe both in the 1944’s and the actual Educational Act. I can see they both have there rights and wrongs but if Education system wasn’t changed after the war in 1944 people in the lower class would still be wronged and there abilities and minds wouldn’t be in today’s societies.