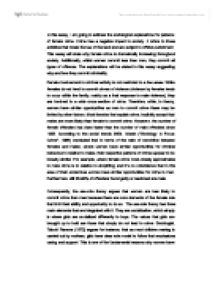 In this essay, I am going to address the sociological explanations for patterns of female crime. Crime has a negative impact in society. It refers to those activities that break the law of the land and are subject to official punishment. This essay will state why female crime is dramatically increasing throughout society. Additionally, whilst women commit less than men, they commit all types of offences. The explanations will be stated in this essay suggesting why and how they commit criminality. Female involvement in criminal activity is not restricted to a few areas. While females do not tend to commit crimes of violence (violence by females tends to occur within the family, mainly as a final response to male violence), they are involved in a wide cross-section of crime. Therefore, while, in theory, women have similar opportunities as men to commit crime these may be limited by other factors. Most theories that explain crime, implicitly accept that males are more likely than female to commit crime. ...read more.

argues for instance, that as most children rearing is carried out by mothers, girls have clear role model to follow that emphasizes caring and support. This is one of the fundamental reasons why women have a low percentage in criminality because of how they are looked after by their mothers and by learning different norms and values to what a father may teach his son/daughter. Social control is another element in the sex roles theory explaining that females are less likely to commit crime because of the closer levels of supervision that they are subjected to at home in childhood. This control carries on throughout life, with the role of women being more constrained that that of males. For instance Heidensohn (1996) points out "An examination of female criminality and unofficial deviance suggests that we need to move away from studying infractions and look at the conformity instead, because the most striking thing about female behaviour is how notably conformists to social mores women are". Heidensohn refers to the wide range of informal sanctions meaning punishments to discourage women from straying from 'proper' behaviour, including gossip, ill repute and the comments of male companions. ...read more.

Socialist feminism is also one main factor in the feminists perspective which concludes and stresses that the position of men and women in general and with reference to crime In particular can only be understood by locating males and females within the context of societies divided by both sexism and by capitalism. Furthermore, radical feminism suggests that the only way to understand crime is to see it through a female perspective. Consequently, post modern feminism is particularly important since Smart (1990) and Cain (1986) argues that the very concerns of criminology (burglary/street crime etc) are actually a reflection of a male concerns, and that women should look at the way women are harmed by whole range of processes. To summarise, I believe that the sex-role theory has valid and understandable facts to why women have low numbers in criminality. I consider better role models truly means a crime free life, which would make this society a peaceful and comfortable place to live in. However, everyone everywhere has once committed a crime being female or male. But we all have to remember "Its not a crime to make a mistake, but it is a crime if you don't learn from it." ...read more.