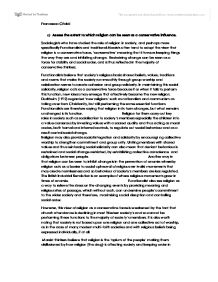 Sociologists who have studied the role of religion in society, and perhaps more specifically Functionalists and traditional Marxists often tend to adopt the view that religion is a conservative force.

a) Assess the extent to which religion can be seen as a conservative influence. Sociologists who have studied the role of religion in society, and perhaps more specifically Functionalists and traditional Marxists often tend to adopt the view that religion is a conservative force, 'conservative' meaning that it favours keeping things the way they are and inhibiting change. Restraining change can be seen as a force for stability and social order, and is thus reflected in the majority of conservative thinkers. Functionalists believe that society's religious basic shared beliefs, values, traditions and norms that make the society run smoothly through group worship and celebration serves to create cohesion and group solidarity. In maintaining this social solidarity, religion acts as a conservative force because if or when it fails to perform this function, new ideas may emerge that effectively become the new religion. Durkheim (1912) regarded 'new religions' such as nationalism and communism as taking over from Christianity, but still performing the same essential functions. Functionalists are therefore saying that religion in its form changes, but what remains unchanged is its function. Religion for them carry out key roles in society such as socialisation to society's members especially the children into a value consensus by investing values with a ...read more.

This conservative force is reflected in religion's function of reproducing, maintaining and justifying class inequality, according to Marx. Religion serves to reflect ruling class ideology and prevents the working class from questioning the true nature of their exploitation by the ruling class and doing anything about it, almost seeing it as 'God's will' and passively accepting things as they are, hence keeping order and preventing social change. Religion, in the view of the Marx, legitimatise social inequality by controlling the classes and promoting the idea that the existing hierarchy is natural, god-given and thus, unchangeable. 'God made them, high or lowly, and order'd their estate.' Religion also disguises the true nature of exploitation by explaining social inequalities in supernatural terms and distorting the real causes (unequal treatment by the bourgoisie) as the product of sin or a sign that people have been chosen by God. Religion can again be seen as limiting change by keeping the working classes passive and resigning to their fate. Some religions present suffering as normal, and suggesting that those who do not question their situation will be rewarded by a place in heaven, promoting the idea that there is no point in changing society now and so preventing the working class from actually doing ...read more.

Religion is used to support dominant groups in America. Item A. claims that modern Protestant fundamentalists religions in the US support traditional right-wing, conservative and anticommunist values. Christian Right groups often suggest that their Christian political positions are, or ought to be, the views of all Christians. Many elements of the Christian Right, like item A states, sympathise with and sometimes influence the US Republican Party (an extremely conservative party). Fundamentalist groups like these want to return to traditional values and practices and therefore have many strong opinions on modern society's 'new ideas'. Many groups have strong opposition to abortion, gay rights movement and pornography but support the presence of Christianity, traditional family values and the teaching of creationism. All of which are extremely conservative ideas and subsequently supporting the claim that religion restricts social change and so are upholding a conservative influence. However, in reality, American Christians hold a wide variety of political views and are not all conservative in their party loyalties. To conclude, both functionalist and Marxists approaches, suggest that religion generally plays a conservative role in society- preventing change and supporting the existing social order. Nevertheless, there is always an alternative position, for example the Neo-Marxist perspective, that it is possible for religion to change societies. ?? ?? ?? ?? Francesca Cifaldi ...read more.