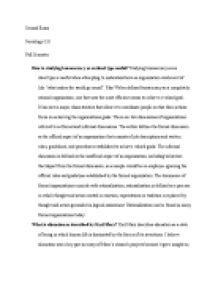 ﻿Second Exam Sociology 131 Fall Semester How is studying bureaucracy as an ideal type useful? Studying bureaucracy as an ideal type is useful when attempting to understand how an organization works sort of like ?what makes the world go round?. Max Weber defined bureaucracy as a completely rational organization; one that uses the most efficient means to achieve a valued goal. It has seven major characteristics that allow it to coordinate people so that their actions focus on achieving the organizations goals. There are two dimensions of organizations referred to as formal and informal dimensions. The author defines the formal dimension as the official aspect of an organization that consists of job descriptions and written rules, guidelines, and procedures established to achieve valued goals. The informal dimension is defined as the unofficial aspect of an organization, including behaviors that depart from the formal dimension; an example would be an employee ignoring the official rules and guidelines established by the formal organization. The dominance of formal organizations coincide with rationalization; rationalization is defined as a process in which thought and action rooted in emotion, superstitions or tradition is replaced by thought and action grounded in logical assessment. Rationalization can be found in many formal organizations today. What is alienation as described by Karl Marx? Karl Marx describes alienation as a state of being in which human life is dominated by the forces of its inventions. ...read more.

An example is the relationship that the United States has with China. All most all the materials that the U.S need come from China; the division of labor is needed so that resources can be gathered and shared amongst the countries that may not produce the materials needed. What are the agents of socialization? What is Socialization? Socialization plays a major part in each person?s life. It determines how we act, think and what type of person an individual will become. The book defines socialization as the process by which people develop a sense of self and learn the ways of the society in which they live in. There are two agents that hold importance in socialization which are; nature and nurture. Nature is one?s human genetic makeup or biological inheritance. Nurture refers to the social environment or the interaction experiences that make up every individual?s life. Socialization has played and still plays a big part in my life. I can remember spending part of my early childhood days up until I was ten years old, living in an area where the people were at or below poverty level and the majority of them were African American or Hispanic. Although that is what my parents and I were born in to that is not where our minds stayed. My parents socialized with people who wanted more out of life and wanted to achieve greatness. ...read more.

What information would you include in a presentation on HIV/AIDS? If I were given the opportunity to give a presentation on HIV/AIDS I would first explain how the virus derived. I would explain to them that the virus is not hereditary but it is developed after contact with an individual who carries the virus or \it can be passed on from mother to baby during birth. HIV stands for Human Immunodeficiency Virus which attacks your cells and weakens your immune system causing the virus to eventually turn into AIDS if not treated regularly. AIDS stands for Acquired immunodeficiency Syndrome. AIDS is very deadly and can eventually lead to death if not properly treated. Having HIV/AIDS does not mean that this is the end of your life it just means that you have to adapt to a new way of living. How does Durkheim define suicide? Durkheim defined suicide as the act of severing relationships. To make his case he argued that every group has greater or lesser propensity for suicide. There are four types of suicide; #1 being Egoistic which is suicide resulting from weak social ties that fail to attach the person to the group and #2 Altruistic which results from social ties so strong that the self has no life from the group. #3 Atomic results from social ties disrupted by dramatic change in economic circumstances.#4 Fatalistic resulting from social ties whose disiplin is so oppressive it offers no chance of release. ...read more.