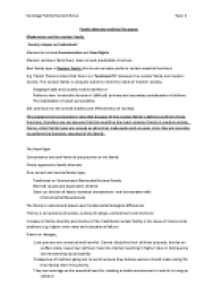 ﻿Sociology Family Revision Notes Topic 6 Family diversity and the life course Modernism and the nuclear family ?Society shapes us/individuals? Modernists include Functionalists and New Rights Modern society is fairly fixed, clear cut and predictable structure Best family type is Nuclear family this structure helps perform certain essential functions E.g. Talcott Parsons states that there is a ?functional fit? between the nuclear family and modern society. The nuclear family is uniquely suited to meet the needs of modern society; Geographically and socially mobile workforce Performs two ?irreducible functions? (difficult) primary and secondary socialization of children. The stabilization of adult personalities (All contribute to the overall stability and effectiveness of society) This explains the functionalist?s view that because of the nuclear family?s ability to perform these functions, therefore we can assume that this would be the most common family in modern society. Hence, other family types are viewed as abnormal, inadequate and unusual, since they are less able to perform the functions required of the family. The New Right Conservative and anti-feminist perspective on the family Firmly opposed to family diversity One correct and normal family type; Traditional or Conventional Patriarchal Nuclear Family Married couple and dependent children Clear cut division of labour between breadwinner and homemaker-wife (Instrumental+Experessive) The family is natural and based upon fundamental biological differences ?Family is cornerstone of society; a place of refuge, contentment and harmony? Increase in family diversity and decline of the traditional nuclear family is the cause of many social problems e.g. ...read more.

Overall Chester states the importance of family diversity has been exaggerated, sees the nuclear family as dominant like functionalists , yet believes that there has been a change to neo-conventional family where both spouses play ?instrumental+ expressive role?. The Rapports: five types of family diversity (Rapports 1982) Family diversity is the central importance in understands family life today. We have moved away from the dominant nuclear family to a range of family types Families have adapted to a more pluralistic society ? society that has become more diverse in term of cultures+ lifestyles. Family diversity represents freedom of choice and the widespread of acceptance of different cultures and lifestyles. Unlike the New Rights, Rapports sees diversity as a response to people?s needs and wishes, not an abnormal and deviation from the norm. Five different types of family diversity: Organisational diversity- differences in the ways family roles are organised (joint-conjugal roles, segregated- conjugal roles and two wage earners Cultural diversity ? different cultures and religions have different family structures eg Indian extended family. Social class diversity ? different incomes different structures life-stage diversity ?stage in life cycle affects family structure Generational diversity ?different generations have different attitudes and experiences which reflect the historical period they lived in. Post modernity and the life course Life course analysis (Hareven 1978) The idea that there is flexibility and variation in people?s choices- timing and sequence in events in their lives (have baby, come out) ...read more.

No longer possible to generalise,-unlike modernist sociologist such as Parsons. The divorce extended family Stacy 1998 Greater choice has enable women to free them from patriarchal oppression and shaping family arrangements to meet own needs Life history interviews ? found out that women were main agents of changes in the family; many rejected the traditional house wife role. Morgan 1996 Pointless trying to make large scale generalisations about the family as if it was a single thing. Like functionalists, instead more attention to how people create their own diverse family lives and patterns. The growing acceptance of diversity weeks 2000 Identifies a long term shift in attitudes since the 1950?s Shown that sexual morality has become largely a matter of personal choice The church and state have lost much of their power to influence individual morality Growing acceptance of sexual and family diversity especially under 35s More favourable attitudes towards cohabitation and homosexuality Although there are changing attitudes; Family patterns still fairly traditional People still live in a family Most brought up by couples Most couples marry Many divorces re marry Weeks argues that sexual and family diversity are now an undesirable accepted fact, despite new right Two views of family diversity 1 against diversity (functionalists, new rights) States there is only one best normal family type Natural based on biological differences Nuclear family best equipped to meet needs of society 2 in favour of diversity (post-modernists, new rights) A family is simply whatever arrangements those involved choose to call a family not natural but social constructed by its members. ...read more.