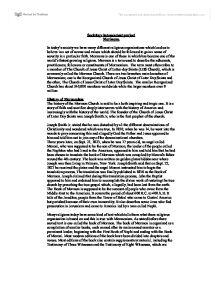 Sociology independent project Mormons. In today's society we have many different religious organizations which lead us to believe in a set of norms and values which should be followed to gain a sense of security in a particular faith. Mormons is one of these in which has become one of the world's fastest growing religions. Mormon is a term used to describe the adherents, practitioners, followers or constituents of Mormonism. The term most often refers to a member of The Church of Jesus Christ of Latter-day Saints (LDS Church), which is commonly called the Mormon Church. There are two branches main branches of Mormonism; one is the Reorganized Church of Jesus Christ of Later Day Saints and the other, The Church of Jesus Christ of Later Day Saints. The smaller Reorganized Church has about 240,000 members worldwide while the larger numbers over 9 million History of Mormonism The history of the Mormon Church is said to be a both inspiring and tragic one. It is a story of faith and sacrifice deeply interwoven with the history of America and increasingly with the history of the world. The founder of the Church of Jesus Christ of Later Day Saints was Joseph Smith Jr, who is the first prophet of the church. Joseph Smith Jr. stated that he was disturbed by all the different denominations of Christianity and wondered which was true. ...read more.

* The nature of god - God the Father is an exalted man (a man who has progressed to godhood) with a body of flesh and bones. Teachings of the Prophet Joseph Smith, 1973 ed., p. 346 - "God himself was once as we are now, and is an exalted man...I say, if you were to see him today, you would see him like a man in a form-like yourselves in all the person, image, and very form as a man." * The doctrine of salvation - Christ's death on the cross (the atonement) cancelled the penalty of death imposed on ALL men through Adam's sin, thereby ensuring that all men would be redeemed - resurrected and given immortality (the reuniting of spirit with body)-as a gift. "If there had been no atonement, temporal death would have remained forever, and there never would have remained forever, and there never would have been a resurrection. The body would have remained forever in the grave" (Mormon Doctrine, 1977 ed., p.63) "Redemption from death, through the sufferings of Christ, is for all men, both the righteous and the wicked. * Mormons believe that God has a plan for each of us, which began before we came to earth, and which will continue after this life. Those beliefs are set forth in thirteen clear declarations known as The Articles of Faith. ...read more.

* The sacred - God is the sacred being to them, who should be worshipped. Mormons have the book of Mormon which is their sacred text were they follow its teachings. Mormonism can also be said to be an exclusive definition of religion. This is where you worship a god or supernatural being, a holy book, have leaders, worship in some way that God. Mormonism can be said to encounter all these characteristics so it is much more suitable to place under this definition as it is very controlled. However Mormonism could be put under the functional definition of religion as thus religion does show social solidarity with everyone joining together to worship in a chapel the Mormon book and God. Also it functions to influence people that Mormonism is the way forward. It is very hard to put Mormonism in a particular definition of religion as it key beliefs and characteristics overlap the definitions. But in my eyes it is a religion as there is a form of worship taking place in a church. There are also a huge number of followers of the Mormon religion and they all meet at Salt Lake City to worship. Growth of Mormonism Today there are around 13 million members of the Latter Day Saints church with around 1 million being added every 3 years. There are many reasons why there has been a big growth in Mormonism. ...read more.