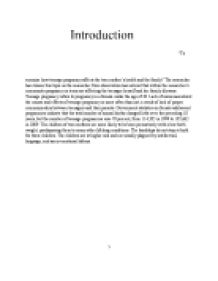 has been conducted in the Community L on the issue of Teenage Pregnancy and how affected the mothers health and family In so doing the researcher hopes to provoke policy makers and social service providers to become pro-active at the community level in matters relating to family life which in turn affects community and national development In order to get information on my topic ?teenage pregnancy contributes to poverty? a research design was chosen. The research design that the researcher chose was quantitative. Quantitative data usually takes the form of statistical or numerical information. There are a number of advantages of using a quantitative research design. * One advantage is that this method allows the researcher to analyze data. the reliability of the data is another advantage * It was useful for collecting large amounts of data in a short period of time. * Another advantage is that the data that is provided on this topic was easy to quantify There are some disadvantages of using the quantitative research method. * There is no indication of the personal state of the respondents, the mood, attitude or feeling of the teen mother and family may not be seen because the research was done using a questionnaire ________________ For this research the type of sampling was used is probability sample. The type pf probability used was simple random sampling. The simple random sample was used instead of the quota sample since teenage pregnancy is a prevalent issue in the researcher?s community. In order to make this research accurate and unbiased the form of random sampling had to be selected because not every family in the community was affected by this matter. This type of sample allows individuals to be chosen randomly therefore everybody has the same chance of being selected The research is about the cause and effects of teenage pregnancy on the pregnant teen?s health and her family therefore this type of sample allows the researcher to pick answers by teen mothers and her family ...read more.

Khouzam says, "s****l abstinence is not associated with public health risks and needs to be presented and promoted as the most effective primary prevention for unplanned pregnancies" Abstinence from s*x (oral, a**l or v*****l) is the only behavior that is 100 percent effective at preventing teenage pregnancy. In fact, the National Campaign stresses that abstinence from s*x is the best choice for teens as it avoids early pregnancy, parenthood and s******y transmitted infections (STIs). Planned Parenthood reminds teens that remaining abstinent is a behavior choice and it can be difficult for some people. Another form of teenage pregnancy prevention that is being taught in schools is various contraceptive techniques. Although abstinence remains the best way to prevent pregnancy among teens, it is a fact that there are still a large number of them who will be involved in s****l relations. For this reason, it is important that teens be provided with broad information on how to do so responsibly using various contraceptive techniques. Most of the s*x education in schools consists of one message: "Don't have s*x--but if you do, use a condom?. The problem that rises from this is that teenagers are not being exposed to extensive information on the various forms of birth control, condoms, and other methods of prevention that are available. According to Helen Lippman, contraceptives are talked about in s*x education classes, but only as being ineffective in preventing pregnancy and diseases. Also, these classes on contraceptives should include information on how to obtain the different methods of birth control. Jocelyn Elders has also advocated school-based health clinics nationwide with the purpose of reducing teen pregnancy with the availability of contraceptives. This is a way to ensure contraceptive use for many young teens who, rather than going to their parents for help in obtaining birth control, choose to have s*x without protection simply because that protection is not made available to them. ________________ Mustapha.N (2006) SOCIOLOGY FOR CARIBBEAN STUDENTS Kingston. Jamaica, Ian Randle Publishers Bergmann, P. G. (1993). Relativity. In The new encyclopedia Britannica (Vol. 26, pp. 501-508). Chicago: Encyclopedia Britannica. ...read more.