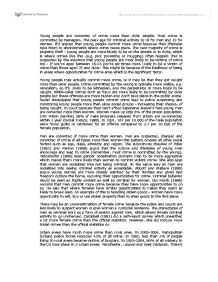 Young people are convicted of crime more than older people. Most crime is committed by teenagers. The peak age for criminal activity Is 18 for men and 15 for women. It's argued that young people commit more crime because their lifestyles take them to environments where crime takes place. The vast majority of crime is property theft - young people are more bluely to be on the streets or in clubs, which is where crimes like this (e.g. pick pocketing or mugging) often happen. this Is supported by the evidence that young people are most likely to be victims of crime too - If you're aged between 16-25 you're six times more Likely to be a victim of crime than those aged 75 and older. This might be because of the likelihood of being in areas where opportunities for crime arise which is the significant factor. Young people may actually commit more crime, or it may be that they get caught more than older people. ...read more.

Criminal behavior would be seen as highly deviant as well as criminal for women. Ian Marsh (1986) reckons that men commit more crime because they have more opportunities to do so. He said that where females have similar opportunities to males they seem as likely to break laws. An example of this is handling stolen goods - women have more opportunity to sell, buy or use stolen property than to steal goods In the first place. There may be an underestimation of female crime because the police and courts are less likely to suspect women or give women a custodial sentence. The stereotypes of men as criminal work as a form of sexism against men, which allows female criminal activity to go unchecked. Campbell (1981) did a self-report survey which unearthed a lot more female crime than the official statistics. However, she did include more trivial crimes than the official statistics do Urban areas have much more crime than rural ones. In 2003-2004, Metropolitan (urban) ...read more.

concluded that the police were institutionally racist. The court system has also been accused of automatically favoring white middle class defendants. There are few black people in either the police force or the legal system. Hall et al (1978) and Gilroy (1987) argue that young black people have been labeled as criminal by modern British society and have become a scapegoat for social problems in society. Hall also says that high levels of unemployment among young black men lead some young black men to opt out of mainstream society and turn to crime. New Right sociologists favor a subcultures explanation for the differences. Ethnic minority households are more at risk of crime than other households. E.g. the British crime Survey says they're more likely to be mugged than white groups, and slightly more likely to be victims of vehicle theft. Pakistanis and Bangladeshis were more likely to be burgled. The survey found ethnic minority respondents were more worried about crime in 2000 than white respondents (2004 only 23 of reported crimes in 2003 were solved) - i.e. someone was convicted for the offence in 2003 (2004 social Trends). The social profile of who committed the unsolved and undetected crimes could change these patterns considerably. ...read more.