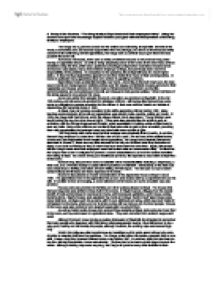 Study all the Sources.

5. Study all the Sources. "The Greg family at Styal treated all their employees fairly". Using the sources and your own knowledge explain whether you agree with this interpretation of the Greg family as employers. The Gregs had a genuine concern for the welfare and well being at Styal Mill. Several of the visual, documentary and oral sources support this view very strongly, and show us that because of this concern for the well being of their apprentices, the Gregs went out of their way to give them the best possible life at the mill. As Source A indicates, there were a variety of different reasons to why Samuel Greg relied heavily on apprentice labour. As well as being 'physically suited for the work', there were many of them available during the time, which was a particular advantage to Styal when local labour became short. As Source A also states, many of the children employed at Styal, had previously been under the responsibility of the parishes. In comparison to the parishes, life at Styal Mill was of a much higher status. In fact, the Styal apprentices appear to have lived better than many of their contemporaries. In towns in particular many apprentices lived and worked in appalling conditions. Styal offered many substantial benefits over towns. According to Samuel Greg's son, the best way to recruit and keep loyal and reliable workers was' fair wages; comfortable houses; gardens for their vegetables and flowers; schools and other means of improvement for children; sundry little accommodations and conveniences in the mill, and interest in their general welfare.' ...read more.

They were deducted from workers' wages each week. Although Source E does not give a positive impression of Styal Mill, it is important to remember that many people who disagreed with child labour often-exaggerated events. Styal Mill proved to be a very good, healthy and fair society for people, although however, the working days were exceedingly long. Work in the mills was often monotonous and repetitive; a child could spend all day tying ends of cotton or cleaning fluff from the machines. The Gregs, unlike other mill owners, operated only on one shift. It was a long one, however: thirteen hours a day before 1847. In summer, when the river was too low for a full day's production, hours were shorter. The time had to be made up with longer hours in the winter. Although working days were very long, the Greg's did provide many other facilities for their employees, therefore, it could have been viewed as a fair system. Thirteen hours a day may have been more acceptable for a child to work during the time, than it would have been today. Although wages in Manchester were higher than, or at least comparable to those paid in Styal, the Styal workforce was better off because in an agricultural area, fresh food was cheaper, and also the cottage allotments enabled families to grow some of their own food. As well as this, in the 1820's a shop was opened in the village. ...read more.

The hazards of working in a cotton mill gradually became apparent to the medical profession. There were a few common occupational health risks, such as eye inflammation, from the use of tallow and Argand lamps. Accidents did occur in Styal, like they occurred in many other mills and town factories around the country. However, with a doctor being employed at Styal Mill, the majority of accidents could probably be dealt with efficiently. During this time, religion was at the centre of peoples' lives. It was natural for the Gregs to take an interest in the spiritual welfare of their workforce. The apprentice children went to Wilmslow church twice on Sundays, as required by the Health and Morals of Apprentices Act Of 1802. Samuel Greg also built a chapel in Styal in 1822 for his employees; a Methodist Society was also formed in the 1830's. As Source I also indicates, Styal Mill was a clean and safe environment, and overall it seems more likely that Samuel Greg had a genuine concern for his apprentices, than for his overall earnings as a mill owner, despite there being several possibilities that say otherwise. Most of the negative sides to his treatment of the apprentices were supposition, and therefore can be discounted as evidence against Greg. In conclusion, I think the work Greg did for the apprentices at Styal, overweighs these minor factors, such as the education provided, the good healthcare, the houses provided, the chapel and the shop, which were built for the apprentices. So despite any ulterior motives he had for treating his apprentices so well, it is proven that they did lead good lives for young mill workers. ...read more.