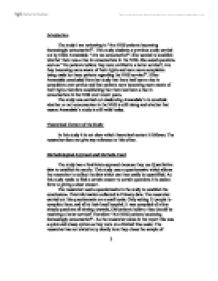 Introduction The study I am reviewing is "Are NHS patients becoming increasingly consumerist?". This study shadows a previous study carried out by Ellen Annandale. "Are we consumerist?". She wanted to establish whether there was a rise in consumerism in the NHS. She asked questions such as " Do patients believe they were entitled to a better service?, Are they becoming more aware of their rights and were more complaints being made by these patients regarding the NHS service?". Ellen Annandale concluded from her study that there had been a rise in complaints over service and that patients were becoming more aware of their rights therefore establishing that there had been a rise in consumerism in the NHS over recent years. The study was carried out shadowing Annandale's to conclude whether or not consumerism in the NHS is still rising and whether that means Annandale's study is still valid today. Theoretical Context of the Study In this study it is not clear which theoretical context it follows. The researcher does not give any reference to this either. Methodological Approach and Methods Used The study has a Positivists approach because they use Quantitative data to establish its results. This study uses a questionnaire which allows the researcher to collect the data which can then easily be quantified. As this study needs to find a certain answer to certain questions it is easiest form to giving a clear answer. ...read more.

This shows clearly in the results. In the first graph it shows that 8 out of 15 respondents answered with neither agree or disagree. That is just over half of the respondents not giving a clear answer. For the research carried out I think the use of a questionnaire is probably the best method that could be used. As the researcher states they were short of time and money. This is a quick and fairly cheap method. It is quick and easy to quantify the results compared to perhaps interviews. The questionnaire is also unable to bias the respondents answers compared to interviews. There is also the fact that some of the respondents may wish to remain anonymous due to the sensitive nature of the questions and they are able to do so with the questionnaire the researcher used they didn't ask for any personal details. This would not have been able to be the case with interviews. However there are some disadvantages to using a questionnaire for research. The respondents may not understand the questions or interpret them in a different way meant by the researcher. Also with the use of closed questions it may limit what the respondent wanted to say which may explain so many neither agree or disagree responses. The researcher could have used other methods such as interviews structure or unstructured but for reasons I have explained they wouldn't be viable. ...read more.

They may not entirely understand a question or interpret it differently to the researchers meaning therefore they may give an incorrect answer. Quantitave data is probably not the best form for validity, qualitative data is argued to be better data for validity. Conclusion This research is very interesting and highlights that NHS patients are becoming increasingly consumerist and that this is still the case after the original study by Ellen Arrandale. Unfortunatley the researcher does not mention when Arrandales original study was carried out so I am unable to see how long it is since the last findings. It is interesting to see the views of the NHS staff and to see what they think of their working situation and the patients. Before reading the research I had my opinion of what the study would conclude and it confirmed my opinions. If it was feasible further research at other hospitals and more variety of NHS staff such as doctors, porters etc. would give a more accurate result of the wider population. This research has achieved what it set out to do and that is to see if Ellen Arrandales research is still valid today and to find out "Are NHS patients becoming increasingly consumerist?". It concludes that the research is still valid today as there is still a rise in NHS patients becoming more demanding, more aware of their rights and that they are making more complaints. 7 Bibliography Class handouts. 2007,2008 Taylor, P. Richardson, J. Yeo, A. Marsh, I. Trobe, K. Pilkington, A. (2004) Sociology in Focus. Causeway Press, Bath. Wallace, H. "Are NHS patients becoming increasingly consumerist?". ...read more.