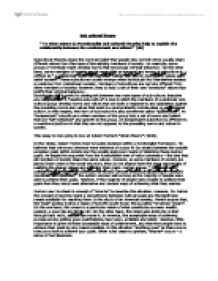 Sub cultural theory " To what extent do Functionalist sub cultural theories help to explain the relationship between the environment and crime?" (40) Subcultural theories share the common belief that people who commit crime usually share different values from the mass of law-abiding members of society. For example, some groups of criminals might develop norms that encourage criminal behaviour. On the other hand, some members of society would regard this as immoral and wrong. A subculture is defined as " a subdivision within the dominant culture that has its own norms, values and belief system". These subcultures usually emerge when individuals find themselves isolated or excluded from mainstream society. Members of subcultures are not any different from other members of society; however, they do hold a set of their own "amended" values that justify their criminal behaviour. Sociologists find it useful to distinguish between two main types of sub-culture; Reactive and Independent. A "reactive sub-culture" is one in which the members of a particular sub-cultural group develop norms and values that are both a response to and opposition against the prevailing norms and values that exist in a predominantly middle-class or conventional culture. In this respect, this form of sub-culture is also sometimes called "oppositional". An "independent" subculture is when members of the group hold a set of norms and beliefs that are "self contained" and specific to the group. An independent subculture is different to a reactive subculture in that they are not opposed to the prevailing norms and values in society. This essay is now going to look at Robert Merton's "Strain theory" (1938). In the 1930s, Robert Merton tried to locate deviance within a functionalist framework. ...read more.

Instead, they create their own subculture, with its own norms and values. In doing this they are rejecting mainstream values, which offer them little chance of success, and substitute deviant values in which they can be successful. Cohen's work has been criticized for a number of reasons. One reason is that he fails to make any references to women and sub-cultural development. This is because that since the primary role for women is that of a mother; she will find status within the home. On the other hand, career women will find status within their work, therefore subverting the need to create alternative forms of status. He has also been criticized by David Matza (1964), who questions the view that most delinquents are strongly opposed to mainstream values and strongly committed to delinquent gangs. In his research in the USA, Matza found that the majority of youths who were seen as delinquent accepted society's mainstream values, and only occasionally committed offences. This essay is now going to look at Cloward and Ohlin - Delinquency and opportunity (1961). Cloward and Ohlin (1961) combine both Merton and Cohen's in their theory of illegitimate opportunity structures. However, they have criticized Merton's theory by arguing that he failed to explain the different forms that deviance takes. For example, why do some delinquents concentrate on vandalism whereas others on theft? They begin their argument from the same view point of Merton, in that believe there is more pressure on members of the working class to deviate as they have less opportunity so succeed by legitimate means. Cloward and Ohlin have distinguished between possible responses to this situation: Criminal subculture, Conflict subcultures and Retreatist subcultures. ...read more.

In order for some adolescents overcome the feeling of powerless, they need to take some action that will 'restore their mood of humanism', and committing a delinquent act assures them of at least some response, even if it is a negative one. This evidence suggests that delinquents are similar to everyone else in their values and voice similar feelings of outrage about crime in general as the majority of society. However, unlike other explanations, Matza argues that individuals "drift" in and out of crime but do not commit to it. He argues that when they do commit deviant acts, delinquents often express "regret" and "remorse" at what they have done. There are critiques to Matza's attack on subculturalist theory however. Stephen Box (1981) questioned the evidence that Matza used; he argues that delinquents may not be sincere when they say that they regret their actions. Jones (1998) adds that Matza's theory cannot adequately explain persistent delinquency and violent acts. Despite these drawbacks, Matza's work has raised some important questions about deviance. In conclusion, functionalist sub cultural theories have been very useful in explaining the relationship between deviance and society. For Merton, crime and deviance were evidence of a poor fit between the socially accepted goals of society and the socially approved means of obtaining these desired goals. This poor fit (or strain) led to deviance. However, other functionalists have argued that all societies will contain certain groups who develop their own distinctive subcultures, with its own norms and values that are different from mainstream society. Within these subcultures, individuals can obtain their goals through crime and deviance. On the other hand, David Matza would counter argue this, claiming that individuals are committed to the same values and norms as other members of society and that delinquents will often express regret and remorse at committing a deviant act. Jessica Pemberton ...read more.