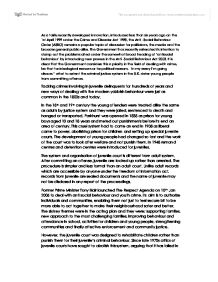 As a fairly recently developed innovation, introduced less than six years ago on the 1st April 1999 under the Crime and Disorder Act 1998, the Anti-Social Behaviour Order (ASBO) remains a popular topic of discussion for politicians, the media and the broader general public alike. The Government has recently reiterated its intention to stamp out the problems cited under the somewhat broad heading of 'antisocial behaviour' by introducing new powers in the Anti-Social Behaviour Act 2003. It is clear that the Government considers this a priority in the field of dealing with crime, be that for ideological reasons or for political reasons. In my essay I'm going discuss'' what to extent the criminal justice system in the U.K. deter young people from committing offence. Tacking crimes involving in juvenile delinquents for hundreds of years and new ways of dealing with the modern yobbish behaviour were just as common in the 1800s and today. In the 18th and 19th century the young offenders were treated alike the same as adults by justice system and they were jailed, sentenced to death and hanged or transported. ...read more.

Many people believe that government's record on youth crime and tackling the multiple needs of children caught up in the youth justice is less impressive than many would have expected following a wide ranging programme of reform and considerable investment. This raises question about the success of the reforms and youth justice. In addition to facts that the Home Office and Youth justice Board launched in 2001 new initiatives in increasing sport activities to reduce anti social behaviour, crimes and drugs. This is attempted using sporting programmes which involve coaching and competitions, training and mentoring, linked educational programmes and leadership training. Former Youth justice Board Professor Rod Morgan argued that if we are dragging into the system kids who can be dealt with outside then we are overloading it and that means it is likely we will not do as good as a job the public expect with higher risk cases. Furthermore Professor Morgan indicated that more schemes dedicated police officers are needed in school to tackle anti social behaviour. There are only 400 schemes in school cross the country, even though they are successful in reducing the number of children excluded from school and therefore reducing the possibility of such children committing offence (The Independent 2006). ...read more.

The scheme would give every young person in Britain the chance to develop their self esteem and self respect by participating in community activity at home (Daily Mail 2006). After all, the government should carefully look at where the tearaways commit offences and put more disproportionate amount to tackle the youth crimes and also look at deeply difference in the custom to modern adult life and the opportunities of young people to be able to grow up safely and successfully. Furthermore the government should make sure in creation a youth club where young people have extra activities such as military art, sports, drama clubs, and scouts and so on. This would help promote personal skills and reduce problem behaviour across teens and adult childhood. It would also provide the opportunity to mix with non abnormal peers to be mentored by adult activity leaders and work towards clean goals. If these measure were taken by the government they would decrease crimes, anti social behaviour, etc and the future of Britain young people would be brighter and more successful. Travis. (The Guardian 2 Nov 2006) Brogan (Daily Mail 11 Jan 2006) Respect Dyer, (The Guardian 21 May 2008) The Independent (23 April 2006) Special report; The ASBO kids ...read more.