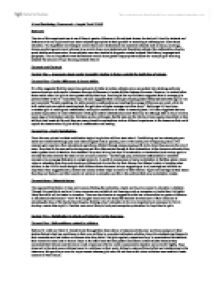 The aim of this experiment was to see if there is gender difference in the subjects chosen for study at A level by students and furthermore to see if girls and boys chose subjects appropriate to their genders.

A level Sociolology Coursework - Angela York 13JAS Rationale The aim of this experiment was to see if there is gender difference in the subjects chosen for study at A level by students and furthermore to see if girls and boys chose subjects appropriate to their genders as according to stereotypical views about education. The hypothesis was that girls would chose more abstract and less academic subjects such as dance, sociology, drama, psychology and music whereas boys would chose more technical and theoretical subjects like mathematics, physics, sports studies and economics. Some subjects were also decided to be gender neutral subjects like history, languages and geography. The null hypothesis was that students would chose gender inappropriate subjects for example girls choosing subjects like science or boys choosing subjects like art. Concepts and Contexts Context One - Arguments about gender inequality relating to factors outside the institution of schools. Concept One - Gender differences in innate ability. It is often suggested that the reason boys and girls do better at certain subjects and so are pushed into studying particular courses based on such results is because there are differences in innate abilities between the sexes. However, in contradiction these results often find girls to have greater ability than boys. Sociologist Harvey Goldstein suggested that on average girls perform better in the 11+ exam than boys. He also suggested that overall girls display greater ability (at least at the age of 11) and concluded "broadly speaking, for achievement in mathematics and reading the average differences are small, while for both verbal and non-verbal reasoning tests, the girls have a higher average score than boys". ...read more.

Boys observed in the study were criticised more for untidiness in their work, failing to make sufficient effort and misbehaving in the classroom, this gave boys room for improvement whereas girls who did not receive this minor criticism were unable to make excuses for their failure. Concept Two - Invisible women. Dale Spender, in her book 'Invisible Women', suggested that education is largely controlled by men who use their power to dictate masculine knowledge as important, and feminine knowledge as less significant. But she suggests that this dominance of men in the education system as only an example of the larger dominance of men in the outside world with the example of economics and the unpaid domestic work of women as being ignored. She points out that while the structure of and workings within the education system is not the cause of gender inequality in society - it is still a major contributor towards the inequality of educational opportunity that gives rise to the overall dominance of men and subordination of women. In her study, she tape recorded some of her classes and attempted to consciously divide her time equally between both the boys and the girls of the group, yet when she referred back to the tapes she found only 38% of her time had been spent interacting with girls. She argues that the boys in the group often dismissed girls' contributions to discussions and debates, were often insulting to the girls of the group and when they did they were rarely rebuked by the teacher for their behaviour. ...read more.

This was done again except for the next question whereby it was calculated how many participants of each gender had given each reason for choosing their chosen subjects. Finally the subjects each gender group said they would consider taking at degree level, including those who said they would not be taking any degree were gathered. This gave some very clear gender differences. No ethical considerations particularly had to be taken into consideration as it was unlikely to cause any of the participants any offence or harm, although all were fully debriefed after completing the questionnaire and given the chance to withdraw their information from the study. It was not possible to fully explain the purpose of the questionnaire before they had completed it because it may have affected results or even biased them if participants had tried to answer in a way they perceived to be impressive or 'correct' to the experimenter. There are many problems with questionnaires and the data found is not always valid. This is because the participant has to interpret the question and respond appropriately, which can often lead to ambiguity if the questions are not clear using non-specialist language. Sometimes the questions can also be too transparent. Results It was clear from the results that participants mostly studied subjects appropriate to their gender for example boys mostly studied sciences and mathematics while girls mostly studied dance, sociology and languages. Boys were least likely to study a gender inappropriate subject. More girls than boys studied gender inappropriate subjects. ...read more.