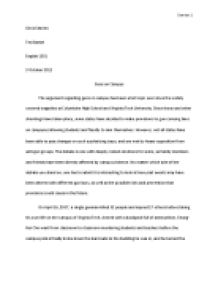 ﻿Semien Chris Semien Ted Daniel English 1301 3 October 2012 Guns on Campus The argument regarding guns on campus has been a hot topic ever since the widely covered tragedies at Columbine High School and Virginia Tech University. Since those and other shootings have taken place, some states have decided to make provisions to gun carrying laws on campuses allowing students and faculty to arm themselves. However, not all states have been able to pass changes on such a polarizing issue, and are met by heavy opposition from anti-gun groups. The debate is one with deeply rooted emotions for some, as family members and friends have been directly affected by campus violence. No matter which side of the debate you stand on, one has to admit it is interesting to look at how past events may have been altered with different gun laws, as well as the possible risks and prevention that provisions could cause in the future. On April 16, 2007, a single gunman killed 32 people and injured 17 others before taking his own life on the campus of Virginia Tech. Armed with a backpack full of ammunition, Seung-Hui Cho went from classroom to classroom murdering students and teachers before the campus police finally broke down the barricade to the building he was in, and he turned the gun on himself. ...read more.

(Colorado Court of Appeals 3) Those opposed to the notion of allowing firearms on campus often hang onto the risks that such enactments could possibly result in. Eliminating gun-free campuses nationwide could, in a sense, create very tense and hostile environments in schools and brings up several questions such as, ?Will students feel safer knowing that the student sitting next to them could be ?packing??? (Siebel 1) The atmosphere created by the chance that there are people armed with guns sitting in close proximity to one another could spoil the integrity of "academic debate" (Rogers 1) in some if not most college campus settings, much pride is invested into the ability to share differing and sometimes controversial ideas on what could be an emotion stirring topic. '"[School] is a place where we depend on being able to speak our minds and offer sometimes controversial opinions in a free and open place," she said. "The feeling among a percentage of faculty is that this will create a climate of fear and intimidation.'" (Frosch) The prospect of having guns in the classroom makes many people nervous or fearful for understandable reasons, and would likely lead to less focus on actual instruction and academic participation. This immediate effect could also hold larger ramifications as time goes on with the possibility of affected grades, graduation rates, and possibly even lower enrollment rate from state to state depending on the campus gun laws. ...read more.

While the likelihood of an attack occurring is admittedly not very high, it would be interesting to hear a Senator explain those odds to the family of someone killed in one of the many tragedies taken place across the country. Also needed to take into account is the fact that some reports on violent crime ?excludes incidents in which only one person was killed or injured, as well as incidents in which a student started shooting, but no one died.? (CLAJ 291) Therefore leaving some reports skewed to the notion that an attack is not likely. The amounts of varying factors weighed in the decision whether or not to permit guns on campuses, causes a major divide between stances in the issue. Such a polarizing issue as gun control can never come to complete compromise. Those uneasy about the idea of having live firearms in a classroom are unlikely to ever feel completely comfortable, and those who feel their right to self defense is being violated will continue to do so. Whether or not more states decide to adopt changes to gun laws, there will continue to be close attention paid to the measures campuses and states take to ensure the safety of students and staff. We can always speculate what could have been prevented, however much can be taken from tragedies in the past in an effort to deter any future attacks and prevent any more senseless acts of violence. ...read more.