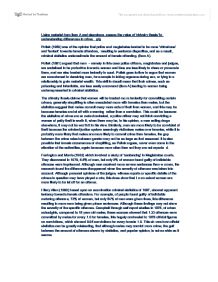 The chivalry thesis claims that women will be treated more leniently for committing certain crimes, generally shoplifting is often associated more with females than males, but the statistics suggest that males commit many more acts of theft than women, an

Using material from Item A and elsewhere, assess the value of 'chivalry thesis 'in understanding differences in crime. gfg Pollak (1950) was of the opinion that police and magistrates tended to be more 'chivalrous' and 'lenient' towards female offenders, resulting in sentence disparities, and as a result, criminal statistics underestimate the amount of female offending. (Item A). Pollak (1961) argued that men - namely in this case police officers, magistrates and judges, are socialised to be protective towards women and thus are less likely to chare or prosecute them, and are also treated more leniently in court. Pollak goes further to argue that women are accustomed to deceiving men, for example in faking o*****s during s*x, or lying in a relationship to gain material wealth. This skill in deceit mean that their crimes, such as poisoning and infanticide, are less easily uncovered (item A) leading to women being underrepresented in criminal statistics. The chivalry thesis claims that women will be treated more leniently for committing certain crimes, generally shoplifting is often associated more with females than males, but the statistics suggest that males commit many more acts of theft than women, and this may be because females are let off with a warning rather than a conviction. ...read more.

Although these findings may not show the severity of the specific offences. Campbell through self report studies in 1976, of urban schoolgirls, compared to 16 year old males, these sources showed that 1.33 offences were committed by males for every 1.0 for females, this hugely contrasted to 1976 official figures on convictions, which showed 8.95 convictions for every female 1.0. This shows how official statistics can be greatly misleading, that although males may convict more crime, the gulf between the amount of offences shown by statistics, and popular opinion, is not as wide as it seems. Although these studies do give evidence towards the chivalry thesis, the bulk of research does not give this indication. Steven box 1981, reviewed data from self report studies in UK and USA, and concluded that 'the weight of evidence on women committing serious offences does not give clear support to the view that they receive differential and more favourable treatment from members of the public, police or judges'. Although it has to always be remembered that in a self report study, the validity and reliability relies upon the respondent's ability and willingness to tell the truth, which is not always apparent. ...read more.

Frances Hiedensohn 1985 slated the theory greatly, stating that is was based on analysis that had very little evidence and many unsupported assumptions, she regarded it as being based upon an unsubstantiated stereotypical image of women. In conclusion, although some parts of Pollak's chivalry thesis, namely the parts saying women are naturally more likely to conceal crime are quite unsupported and base, studies associated with the theory have hinted that women are often in some cases treated more leniently by the criminal justice system. Although the extent of this cannot really be measured, statistics would have us believe that the gap between male and female criminality is huge, but upon closer investigation this is not the case. Reasons for this may be that criminology and sociology is largely dominated by males that the research is done on males by males, leading to an underrepresentation on female crime, or that perhaps female crimes are comparatively seen as trivial and are not deemed worthy of research. Whichever way it is looked it, there is a case for the argument that females are often not treated as harshly as males upon committing crime, but of course the opposite argument could be valid also. ...read more.

Overall this is a really strong essay. The content never drifts from the focus of the question, there is a good even debate on both sides of the discussion and the use of the item has been applied well. The studies applied are also very effective and support the evidence throughout. At times there is opportunity to apply key terms such as iceberg theory or the hidden figure of crime.