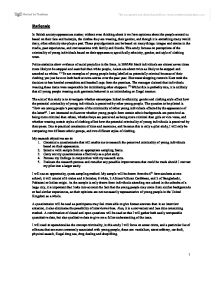 The effect of appearance on the percieved criminality of young individuals

Rationale In British society appearances matter; without even thinking about it we form opinions about the people around us based on their face and hairstyle, the clothes they are wearing, their gender, and though it is something many would deny, often ethnicity also plays a part. These prejudgements can be based on many things: images and stories in the media, past experiences, and conversations with family and friends. This study focuses on perceptions of the criminality of young individuals based on their appearance; specifically ethnicity, gender, and style of clothing worn. Police statistics show evidence of racial prejudice in the force, in 2005/06 black individuals are almost seven times more likely to be stopped and searched than white people, Asians are about twice as likely to be stopped and searched as whites. [1] To see examples of young people being labelled as potentially criminal because of their clothing you just have to look back at news stories over the past year. Bluewater shopping centre in Kent took the decision to ban hooded sweatshirts and baseball caps from the premises. The manager claimed that individuals wearing these items were responsible for intimidating other shoppers. [2] Whilst this is probably true, it is unlikely that all young people wearing such garments behaved in an intimidating or illegal manner. The aim of this study is to investigate whether stereotypes linked to ethnicity; gender and clothing style affect how the potential criminality of young individuals is perceived by other young people. ...read more.

The two groups scored most similarly for the crimes of arson and drug use, suggesting that clothing style is considered less important to the young people in my sample when they are considering how likely their peers are to have committed these crimes. The style of clothing worn seems to have been more important to participants when they were deciding how likely they believed the individuals in the pictures were to have committed assault and vandalism, or to have mugged someone. The graph below compares how likely participants rated white individuals on average to have committed various crimes in comparison to individuals of African/African Caribbean decent. The results suggest that this factor had the least influence of the three on participants when they were assessing the potential criminality of individuals based on photographs. There doesn't seem to be any clear difference in the perceived criminality of the two groups. White individuals were rated on average as being slightly more likely to shoplift, vandalise, mug (street robbery), and use drugs, black individuals were rating as being slightly more likely to commit assault and arson, and to sell drugs. However these differences are small. Past studies have found different results, often with individuals of African or African Caribbean decent being perceived as more criminal in comparison to white individuals. One study, conducted at Penn State University in America, found that when readers were asked to identify criminal suspects pictured in stories about violent crimes, they were more prone to misidentify African American than White suspects. ...read more.

I feel that if larger spaces had been left, participants might have been more inclined to go into detail, giving me a more in-depth understanding of their thoughts, as it was many of the participants wrote very short answers of just a few words. A final flaw with the questionnaire is that the individuals in the photographs do not all have the same facial expressions, and the photographs are taken in different locations. These factors could affect how criminal the individuals are perceived by participants. In order to avoid this problem if the study was to be conducted on a larger scale, photographs could be taken of models in a studio to exact specifications. I believe that a number of issues, as addressed above, affect the validity of my study. The results could not be truly said to answer the hypothesis question because of the small and unrepresentative sample used in the study. The completed questionnaires show a great deal of individual differences between participants, with some rating an individual as "very likely" to commit a certain crime, and others rating the same individual "very unlikely" the crime. It is impossible to know how typical of the whole population the opinions of the twelve people in my sample are. Because of the small sample size, the reliability of my study is also questionable. I do however believe that with the design changes mentioned in the previous paragraph, the research method is sound, and that the use of a larger, representative sample would be all that was needed to validate, and increase the reliability of the study piloted were it to be conducted on a full scale. ...read more.