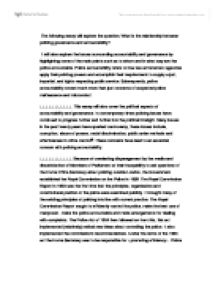 The following essay will explore the question; What is the relationship between policing governance and accountability?

The following essay will explore the question; What is the relationship between policing governance and accountability? It will also explore the issues surrounding accountability and governance by highlighting some of the main points such as to whom and in what way are the police accountable. Police accountability refers to how law enforcement agencies apply their policing powers and accomplish their requirements to supply a just, impartial, and rights respecting public service. Subsequently, police accountability covers much more than just concerns of suspected police malfeasance and misconduct. ??????????? This essay will also cover the political aspects of accountability and governance. In contemporary times policing issues have continued to progress further and further into the political limelight. Many issues in the past twenty years have sparked controversy, these issues include, corruption, abuse of powers, racial discrimination, public order methods and effectiveness in crime control[1]. These concerns have lead to an essential concern with policing accountability. ??????????? Because of unrelenting disparagement by the media and dissatisfaction of Members of Parliament at their incapability to ask questions of the Home Office Secretary about policing outside London, the Government established the Royal Commission on the Police in 1959. The Royal Commission Report in 1960 was the first time that the principles, organisation and constitutional position of the police were examined publicly. It brought many of the existing principles of policing into line with current practice. The Royal Commission Report sought to efficiently control the police, make the best use of manpower , make the police accountable and make arrangements for dealing with complaints. The Police Act of 1964 then followed on from this, this act implemented (relatively) radical new ideas about controlling the police. It also implemented the commission's recommendations. Under the terms of the 1964 act the Home Secretary was to be responsible for ?promoting efficiency?. Police authorities had the duty to maintain adequate and efficient. Police forces, while chief constables were required to exercise direction and control over the force. ...read more.

In 1998, the amalgamation of six regional crime squads established the National Crime Squad (NCS). Also in operation since 1992 is the National Criminal Intelligence Service (NCIS), in 2004 the Serious Organised Crime and Police Bill was also added to the police force and this year sees the intention to bring together the NCS, NCIS and as a result, the need for police accountability is inevitably intricate and complex. In England and Wales police accountability during the 1980s became projected into the political limelight. The Conservatives under Thatchers power were happy with the status quo at the time but Labour wanted radical changes. Both parties had issues relating to who controlled the police, who ought to control them and whether they were past democratic control. In contemporary years the debate on accountability has moved to centre on police performance and effectiveness. Police authorities were established by the Police Act (1964)[24] with the exception of the Metropolitan Police Authority which was established by the Greater London Authority Act (1999)[25]. Police authorities in England and Wales have a mixture of roles and responsibilities. It pertains to all features of police performance, which include, policies, operations, strategies and tactics. As successful policing entails a police-community partnership, police accountability also seeks to measure, evaluate, and regulate the quality of that relationship. Police authorities also have to consult local communities about the policing of their area and their priorities for that area. Police authorities additionally have a vital role to play in fulfilling their legal responsibility to consult the public in an proficient and successful manner. The governance and accountability of the British police can be contrasted with that of the police in India. Under the constitution of India, the police are the sole responsibility of the state governments, the forces are governed by rules and regulations framed by the states governments. As a result, every state or union territory, which is under the control of the central government, has its own separate police force. ...read more.