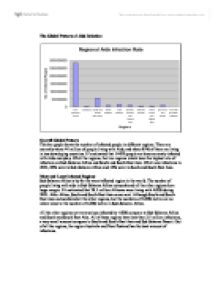 The Global Pattern of Aids Infection.

Woman maybe forced into engage in commercial sex as an economic survival strategy. As the number of orphans grow, increasing number of children are in risk, through the lost of educational opportunities, and forcing them to survive in high-risk situations on the street. Poor educational opportunities for people living in poverty limit their access to the information about AIDS and services. Migrant Workers Many of the most infected countries substantial amount of migrant workers, mainly composed of males working in mining, agriculture, transport, and military forces. The women who provide sexual services for those migrant workers are particularly at risk. As a result of more interaction between the prostitutes and migrant workers, the transfer rate of AIDS increases. Status of Women High dependency of male partners and low educational standard of female limits the female's choice to determine their sexual relations. The female has no choice to determine their sexual relationship so it is very likely that the female will be at risk if the male has the disease. That's why there are more female AIDS victims than male. Denial Governments in Africa refuse to see AIDS as a serious problem, and pay only little attention to it. ...read more.

More than 100 episodes radio drama has been developed, dealing with AIDS related issues and encourage changes in behavior toward sex. Another initiative has involved workplace peer counseling, including the development, piloting and distribution of facilitator's manual. Youth education Youth Health Organization (YOHO) is a youth run non-governmental organization that aims to provide young people sex education. AIDS related sex education at schools play an important role in educating young people, and the teaching materials have been developed for student by the Ministry of Education. A teacher capacity building program has been developed by the Ministry of Education and the UNDP, in collaboration with the government of Brazil and ACHAP. This program aims to improve teachers' knowledge on AIDS and break down cultural beliefs about sex and sexuality. It is hoped that this will promote free and informative discussion about AIDS. Condom Distribution and education There has been a success in social marketing of condoms, and this includes a launch for both male and female condoms and making condoms more commonly products. One of Botswana key marketing strategy for condom is peer education, with peer education being conducted in different places such as school, shopping malls, bar and workplace. Recently, a market research campaign carry out by ACHAP suggested a need for the increased marketing of condoms. In response, with the support of ACHAP, the government provided free condoms to the public. ...read more.