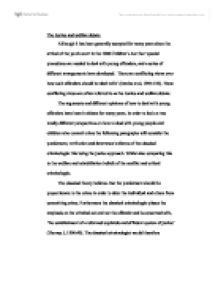 The Justice and welfare debate.

The Justice and welfare debate Although it has been generally accepted for many years since the arrival of the youth court in the 1908 Children's Act that 'special procedures are needed to deal with young offenders, and a series of different arrangements have developed. There are conflicting views over how such offenders should be dealt with' (Davies et al, 1995:136). These conflicting views are often referred to as the Justice and welfare debate. The arguments and different opinions of how to deal with young offenders have been in debate for many years. In order to look at two totally different perspectives on how to deal with young people and children who commit crime the following paragraphs will consider the punishment, retribution and deterrence believes of the classical criminologist this being the justice approach. Whilst also comparing this to the welfare and rehabilitation beliefs of the conflict and critical criminologist. The classical theory believes that the punishment should be proportionate to the crime in order to deter the individual and others from committing crime. Furthermore the classical criminologist places the emphasis on the criminal act and not the offender and is concerned with, 'the establishment of a reformed equitable and efficient system of justice' (Tierney J, 1996:49). ...read more.

The welfare approach argues that the Criminal Justice Act 1989 expressly stated that 'the child's welfare should be the courts paramount consideration' (Rutherford A, 1992:146). A criticism of the welfare approach to dealing with young offenders would be that in allowing social workers and social enquiry reports to play to big a part in deciding on how the young offender should be dealt with, to much consideration is given to the offender. Thus justifying the young offender's criminal act. Advocators of retribution and punishment as deterrence to young people not to commit crime believe that the welfare approach would escalate crime figures even more. They argued that social workers should only be used in a supervisory capacity if the young person is looking at receiving a custodial sentence. Morris et al (1980) and Taylor et al (1979) criticised the welfare approach to youth crime arguing that it reinforced the believe that some how the young persons criminal act could be justified because of the believe that they were in some way socially and economically disadvantaged. The justice approach to dealing with youth crime however has been strongly criticised a lot in recent years, especially incarceration. ...read more.

However as the next general election approached in 1997 Tony Blair moved youth justice from a 'political to an administrative arena'. Giving responsibility for the new youth justice system to local authority chief executives. The chief executives were then 'charged with establishing multi-agency youth offending teams (YOTs) and producing a local Youth Justice Plan' (Muncie J 2000:6). However 'Responsibility for central direction, oversight, the promulgation and enforcement of national standards for youth justice, quality control and the auditing of the YOTs was placed in the hands of the, Youth Justice Board for England and Wales' ( Muncie J 2000:6). The result of the sanctions mention in the previous paragraph means that 'political and strategic responsibility' originally held by local government we now held by the Youth Justice Board who were directly accountable to the Home secretary. However this is open to criticism as it could be argued that it allows ministers to take the credit for any successes whilst blaming the local authority for any failures. Tony Blair's has made his statement 'tough on crime and tough on the causes of crime many times and the causes of crime will be considered in the following paragraph which will focus on risk factors relating to youth criminality ...read more.