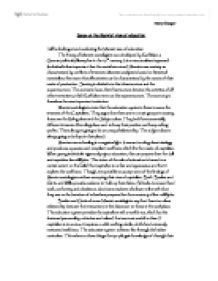 The Marxist view of education

Essay on the Marxist view of education I will be looking at and evaluating the Marxist view of education. The theory of Marxist sociologists was developed by Karl Marx a German political philosopher in the 19th century. It is a structuralised approach (individual is less important than the social structure). Marxists see society as characterised by conflicts of interests. Marxists analysis is based on historical materialism; this means that all societies can be characterised by the nature of their mode of production. Society is divided into the infrastructure and the superstructure. The economic base, the infrastructure dictates the activities of all other institutions, which Karl Marx terms as the superstructure. The economy is therefore the most important institution. Marxist sociologists state that the education system is there to serve the interests of the Capitalists. They argue that there are two main groups in society; these are the Ruling class and the Subject class. ...read more.

They state that the education system produces a subservient workforce. They found that the grades students achieved related more to personality qualities than educational ability. Low grades were related to creativity aggressiveness and independence, while high grades were related to determination consistency, reliability and punctuality. They reject the functionalist view that those who get high qualifications and jobs do so because of their social background and because they do what they are told and work hard. Bowles and Gintis also claim that the hidden curriculum encourages acceptance of hierarchy. Schools are organised on the hierarchical principle of authority and control. This prepares them for relationships within the workplace. Teachers are the ones who give the orders; students are then expected to obey. This relates to their later experience of lack of control in the workplace. They state that pupils learn to be motivated by external rewards for example, educational qualifications. This corresponds with the workplace, workers are motivated by external rewards, a salary or wage. ...read more.

Many pupils break school rules, in one of Willis' studies he found that the working class boys behaved in a way that definitely would not encourage them to be passive workers. Bowles and Gintis ignore the formal curriculum. This is significant in that some of the subjects taught in schools do not encourage uncritical passive behaviour, sometimes the reverse (e.g. communications, law, government and politics etc). Reynolds suggests that Bowles and Gintis fail to sufficiently explain how the economy shapes the education system. He suggests it is not possible for British capitalists to control education as such. Teachers' control to a large extent what occurs in classrooms; they may have quite fundamental ideas. They are not mere capitalist puppets. Bowles and Gintis developed their theory in the 1970's. It is yet still relevant today. The government was responsible for introducing a National Curriculum. This means they have increased control over what occurs in the classroom. Overall, the curriculum has become more openly designed to meet the needs of the economy. Nuray Gungor ...read more.