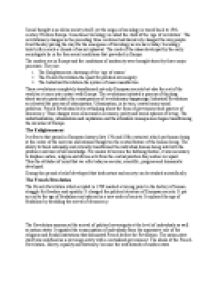 The Origins of Sociology. History and Major Figures.

﻿Social thought is as old as society itself, yet the origin of sociology is traced back to 19th century Western Europe. Sometimes Sociology is called the child of the ?age of revolution?. The revolutionary changes in the preceding three centuries had decisively changed the way people lived thereby paving the way for the emergence of Sociology as we have today. Sociology took birth in such a climate of social upheaval. The roots of the ideas developed by the early sociologists lie in the then social conditions that prevailed in Europe. The modern era in Europe and the conditions of modernity were brought about by three major processes. They are: 1. The Enlightenment- dawning of the ?age of reason?. 2. The French Revolution-the quest for political sovereignty. 3. The Industrial Revolution-the system of mass manufacture. These revolutions completely transformed not only European society but also the rest of the world as it came into contact with Europe. The revolutions initiated a process of thinking about society particularly the consequences of revolutionary happenings. Industrial Revolution accelerated the process of urbanization. Urbanization, in its turn, created many social problems. ...read more.

There were many significant themes which arose due to the impact of this Revolution which have been the focus of interest of the early sociologists. These significant themes include the transformation of property, new social class etc. The Industrial Revolution The foundation of modern industry was laid by the Industrial Revolution, which began in England in the late 18th and early 19th centuries. It brought about great changes in the social and economic life of the people first in England, then in other countries of Europe and later in other continents. It had two important aspects: 1. Systematic application of science and technology to industrial production, particularly invention of new machines and harnessing of new sources of power. These facilitated the production process and give rise to the factory system and mass manufacture of goods. 2. Evolved new ways of organizing labour and markets on a scale larger than anything in the past. The goods were produced on a gigantic scale for distant markets across the world. The raw materials used in their production were also obtained from all over the world. Industrialization threw into turmoil societies that have been relatively stable for centuries. ...read more.

Thus, social fact is exterior to human mind and but it constraints on human behaviour. Hence, social facts do not have their origin in the individual. Further, they should be explained by other social facts, rather than in terms of biological, psychological, environmental, or geographical acts. In Germany, the most influential work was of Max Weber (1864-1920). In comparison to Durkheim, Weber said that the sociologist studies ?social action?, which is an act an individual performs and assigns meaning. The task of sociologists is to understand the subjective meaning of an act. German social thinker Karl Marx?s ideas (1818-1883) were influential in Sociology. He argued that every society was divided into two classes, viz. ?Haves? and ?Have-nots?. He believed that conflict was initiator of change in history. He, therefore, gave central importance to class and class-conflict. Thus the development of Sociology in France (Comte, Durkheim), Germany (Marx, Weber) and England (Spencer) have been outlined as in above. Their contributions have profound influence in Sociology everywhere in the world. Sociology thus flowered in precisely those societies that had experienced the most pronounced or greatest social changes. France, Germany and England underwent a truly revolutionary social transformation; and in all these countries, the study of Sociology had emerged by the end of the 19th century. ...read more.