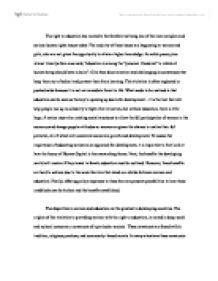 The right to education has moved to the forefront as being one of the most complex and serious human rights issues today.

The right to education has moved to the forefront as being one of the most complex and serious human rights issues today. The majority of these issues are happening to women and girls, who are not given the opportunity to attain a higher knowledge. As noble peace prize winner Amartya Sen once said; "education is among the "personal freedoms" to which all human being should have a claim". Girls face discrimination and challenging circumstances that keep them out of school and prevent them from learning. This violation is often neglected or pushed aside because it is not an immediate threat to life. What needs to be realized is that education can be seen as the key to opening up doors for development - it is the tool that will help people rise up in solidarity to fight other atrocities, but without education, there is little hope. A nation must alter existing social structures to allow the full participation of women in the economy and change popular attitudes so women are given the chance to realize their full potential, all of which will accelerate economic growth and development. To assess the importance of educating women as an approach for development, it is important to first look at how the theory of Human Capital is the overarching theme. Next, the benefits the developing world will receive if they invest in female education must be outlined. However, these benefits are hard to achieve due to the social barriers that stand as a divide between women and education. Finally, offering policy responses to these barriers presents possibilities to how these roadblocks can be broken and the benefits established. ...read more.

To educate a mother is to create intergenerational education benefits. A mother with a few years of formal education is considerably more likely to send her children to school. "Growing research suggests that mothers play a central role in supporting children's education. Nonliterate mothers, obliviously, cannot be of much assistance to the child in the education process. Conversely, literate and educated mothers not only push their children to go to school, but are also able to help them with their school work when they do go to school" (SIL International, 2) By educating a mother, human capital is made sustainable through the perpetual education of the children she will influence. These benefits, if achieved, would change the face of the developing world forever. To educate a women, not only increases human capital, but directly affects the well being of her family and community creating a means for every nation to achieve their development goals. Although the benefits of educating females are significant and would seemingly solve many problems, there are many barriers in achieving these goals. It is important to understand the dynamics behind achieving educational outcomes and also to understand the societal factors that can explain the current state of womens education in the developing world. Parents in the developing world are often more willing to invest in their sons than their daughters. In certain societies, parents tend to favour sons on more levels than just education; but also in how much food they get a dinner, or the distribution of an inheritance. Such behavior might not be seen as obvious discrimination of their children but "may be a rational response to constraints imposed by poverty and to expected returns determined by labour market conditions and traditions" (Meier, 267). ...read more.

This one to one partnership would work best in small rural schools, and should have a contract of at least one year. The teachers would teach the class or schoolhouse jointly. I believe that this type of partnership would create a situation were it would be easier to break down the barriers to education and at the same time, it would not neglect the culture and needs of the women and girls of that specific village community. A simple sharing of teaching space and ideas could create an atmosphere that could change the entire educational structure, and allow women's education to prosper. The broad social benefits of girls' education include increased family incomes, more productivity in the workforce, later in life marriages, reduced fertility rates, and healthier children and families, to mention a few. The barriers that exist that prevent the achievement of these benefits are based around this glooming era of female subordination. If this issue of gender inequality in schools can be eroded by programs and new policies that realize how much human capital could be improved if females were educated, then developing nations would recognize that devoting priority and resources to quality education for females is among the best investments a society can make. The benefits that come with educating women are so profound that if given the proper attention, they have the capacity to direct the poorest countries out of poverty and maximize their economic growth. Educating women is therefore the single most viable answer to creating a backbone for the further advancement of all developing countries. Education.... Is both the seed and the Flower of economic development. (Harbison and Myers 1965, p. xi) 2 ...read more.