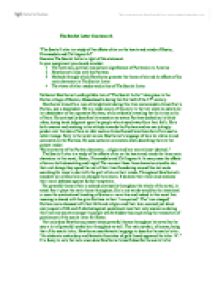 The Scarlet Letter is a study of the effects of sin on the hearts and minds of Hester, Dimmesdale and Chillingworth!&quot;

The Scarlet Letter Coursework "The Scarlet Letter is a study of the effects of sin on the hearts and minds of Hester, Dimmesdale and Chillingworth!" Examine The Scarlet Letter in light of this statement. In your assignment you should consider: 1 The historical, political and cultural significance of Puritanism in America 2 Hawthorne's links with the Puritans 3 Methods through which Hawthorne presents the theme of sin and its effects of the main characters in The Scarlet Letter 4 The views of other readers and critics of The Scarlet Letter Nathaniel Hawthorne's unforgettable tale of 'The Scarlet Letter' takes place in the Puritan village of Boston, Massachusetts during the first half of the 17th century. Hawthorne himself is a man of enlightment during this time and considers himself not a Puritan, just a descendant. We are made aware of this early in the text when he admits he is a descendant of the repressive Puritans, while evidently revealing that he is also critic of them. He continually describes his ancestors as severe Puritans decked out in black robes, laying harsh judgment upon the people who strayed away from their faith. He is both reverent and mocking in his attitude towards the Puritans and we can jokingly ponder over the idea of how an idler such as himself could have been born from such a noble lineage. Early in the novel we see Hawthorne's language of how he relates to and comments on the Puritans. He uses authorial comments when describing them to the present reader: "Early severity of the Puritan characters...religion and law were almost identical." ...read more.

Not only do we see Hester marked with the letter 'A' forever, but we see Hawthorne making the letter 'A' having other means. For example, we see that the scarlet letter also is symbolic of Able and later in the novel of the word Angel. It is revealed later in the novel that the towns' people began to accept Hester and began to admire her for her good nature and strength describing the further meanings of the scarlet letter throughout the book. Some critics, such as Mark Van Doren, view Hester as the only one who has fault in this act: "Irreparably wronged her husband...and also shattered Dimmesdale's peace." I can no doubhtedly disagree with what Van Doren has said here. It is not right to just set the blame on Hester, as it was a poor woman who was lead to believe that her real husband was dead after he had failed to return to her as promised and also the fact that it was as much Dimmesdale sin as well as Hester's. Therefore it is unfair to blame Hester and says that she has shattered Dimmesdale's peace because in a way he has also shattered hers, she was the one forced to live a life of isolation and loneliness. The full effect of Hester's sin of adultery has not ruined this woman's mind. At the least it has changed her way of life, as she was forced to be ostracized by the Puritan society, but this has only lead her to become a more strong and heroic woman in her time. Hawthorne repeatedly presents her as a sympathetic character that we agree to sympathize with, but we later grow to look at her ...read more.

This further explains the shortness in both their deaths later in the novel. Once Dimmesdale dies, Chillingworth dies within a short year of him. As we seen by examining the three main characters in the novel, we see that each dealed with sin in their own unique way. Hester didn't let her sin play on her mind as much as the other two characters as she confronted the Puritan society and accepted her punishment. In doing so she became stronger and a unique feminist even to this day. Dimmesdale on the other hand let the sin he had committed play on his mind the most, he failed to commit to his adultery and punished himself in his own secret world. The results were his slow, torturous lead to death. Lastly Chillingworth, determined to discover who his wife's partner in crime was, made sure that he punished Dimmesdale. He played a very deadly and vicious game with Dimmesdale, torturing him for years on end and intensifying his suffering so much that Hawthorne relates to him as being evil and then progresses it to Satan: "But what distinguished the physicians ecstasy from Satan's was the trait of wonder in it." It is of most a story left up to the imagination, as Mark Van Doren states: "There was no real solution for this story, given Hester's strength, Dimmesdale's weakness and Chillingworth's perversion, than the one he found." Overall we know that it was both Hester and Dimmesdale that Hawthorne sympathized with the most. In the end Dimmesdale did publicly accepted his sin, Pearl and the fallen woman, Hester Prynne. "A spell had been broken." ...read more.