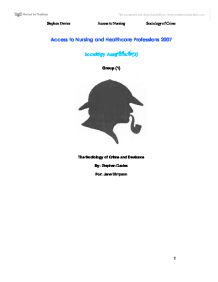 The Sociology of Crime and Deviance

Access to Nursing and Healthcare Professions 2007 Sociology Assignment (3) Group (1) The Sociology of Crime and Deviance By: Stephen Davies For: Jane Simpson Contents Access to Nursing and Healthcare Professions 2007 1 Contents 2 Introduction 3 Theories of Crime and Deviance 4 Functionalist Theory of Crime 4 Merton's Theory of Anomie 6 Marxist Theory of Crime 8 Sub-Cultures 10 Cloward & Ohlim (Delinquency and Opportunity) 11 Social control 11 Labelling 12 Conclusion 13 References 14 Introduction This assignment contains information on the theories of crime from a sociological viewpoint. Theories in this assignment include Marxist, Functionalists, Merton's theory of anomie and so on. Crime has been in society since time began and as humans have evolved, so has crime and punishment. There are a number of reasons why criminality happens and this could be due to oppression from a capitalist system, family has a history of criminality or even to feed the family. Many years ago criminals, who were very poor targeted the rich, would often go into town or to a neighbourhood with rich homeowners. In modern day society criminals will usually target the house down the road of a working class man as they have exactly what the criminals want. Working class men in the 18th and 19th century were very different to the working class men of modern day society. It could be argued that compared to the working class years ago, modern day working class people would be seen as being in the lower-middle class. ...read more.

Modern Marxists point to education and the media as socialising agencies, which delude or 'mystify' the working class into conforming to a social order, which works against its real interests. It seems that, to Marxists, crime is a result of exploitation in that one group exploit another group. In this case it would be the ruling class exploiting the working class. Karl Marx himself believes that the high rate of crime in western capitalist countries represents a protest against alienation and powerless. Capitalism is a competitive ideology whereby people are encouraged to be aggressive in order to achieve material gains and status. An example of this would be when politicians or football managers are forced to step down if they make the slightest mistake, even if they were not to blame. It is therefore suggested that the law is there to protect the interests of the powerful in order to control workers and to maximise profits. The mass media collude in exaggerating the crimes of the powerless. It is also argued, by neo-Marxists, that as long as people have there comforts, such as cars, televisions for example, no one will notice they are being exploited, as they are contented with the things that they have. This, according to Marxists, is called "a state of false-consciousness". For example, the no smoking ban that came into effect in Wales will mean more people staying at home watching television, instead of going out socialising with the rest of society and at the same time realising from this socialisation that people are being exploited. ...read more.

The different viewpoints can be looked at and similarities can be seen in society of today. However, there is no question that crime brings people closer together. For example, the 9/11 attacks was a crime of terrorism, but it brought nations together to fight against terror. Little Madeline McCann, who was taken from her mother and father by an unknown stranger, brought countries together, to pray and help seek out the perpetrators. Even the pope met with the McCann's to pray for them and guide them spiritually. Crime happens for a number of reasons and crime will continue to exist until the end of time. However, there is a potential to reduce crime and that is by looking and the causal factors of why people choose criminality as a means of making ends meet. If causal factors can be addressed then crime may reduce. Sub-cultures, for example gangs, have their own circle of norms and values. Their norms will usually be different to mainstream society norms, however, the gangs still adhere to their social rules within the group. This is a form of control because even when mainstream society norms are broken, the norms within the gang are maintained. Thus, gang members are controlling each other. Another example is the saying, "honour amongst thieves". Whichever way society looks at the theories described, society is being maintained and controlled, either informally or formally. And there is no way out of it because social control is in every country between every social system, from the family to school to Government. ...read more.