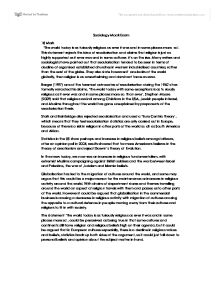 'The world today is as furiously religious as ever it was and in some cases more so' to what extent is this statement supported.

Sociology Mock Exam 18 Mark 'The world today is as furiously religious as ever it was and in some places more so'. This statement rejects the idea of secularisation and claims that religion is just as highly supported as it ever was and in some cultures it's on the rise. Many writers and sociologists have pointed out that secularisation tended to be seen in terms of decline of organised established churches in western industrialised countries, rather than the east of the globe. They also state however if one looks at the world globally, then religion is as overwhelming and dominant force as ever. ...read more.

Stark and Bainbridge also rejected secularisation and used a 'Euro Centric theory', which means that they feel secularisation statistics are only carried out in Europe, because of there is a risk in religion in other parts of the world such as South America and Africa. Statistics in the US show perhaps and increase in religious beliefs amongst citizens, after an opinion poll in 2004, results showed that far more Americans believe in the theory of creationism and reject Darwin's theory of Evolution. In the news today, we now see an increase in religious fundamentalism, with extremist Muslims campaigning against British soldiers and the war between Israel and Palestine, the war of Judaism and Islamic beliefs. ...read more.

However it could be argued that globailisation in the commercial business is causing a decrease in religious activity with migration of cultures causing the opposite to a cultural defence in people moving away from their cultures and religions to fit in with society. The statement 'the world today is as furiously religious as ever it was and in some places more so', could be perceived as being true in that some cultures and continents still have religion and religious beliefs high on their agenda, but it could be argued that in European cultures especially, there is a decline in religious values and beliefs, statistics back up both sides at the argument, so it could just fall down to personal beliefs and opinion about the subject matter in hand. ...read more.