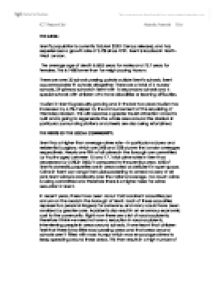 There is a need in the community for a drastic reduction of crime. Such technologies that can be used to cut this problem down can be found in the Data Capture and Control and Monitoring categories.

THE AREA: Brent's population is currently 263,464 (2001 Census release), and has experienced a growth rate of 3.2% since 1991. Brent is located in North-West London. The average age of death is 68.8 years for males and 75.7 years for females. This is 7-8% lower than for neighbouring Harrow. There are over 30 school crossing patrols outside Brent's schools. Brent accommodates 91 schools altogether: There are a total of 4 nursery schools, 59 primary schools in Brent with 14 secondary schools and 4 special schools with children who have disabilities or learning difficulties. Tourism in Brent is gradually growing and in the last two years tourism has increased by 4.7%, helped by the announcement of the rebuilding of Wembley stadium. This will become a greater tourist attraction once it is built and is going to regenerate the whole area around the stadium in particular; surrounding stations and streets are also being refurbished. THE NEEDS OF THE LOCAL COMMUNITY: Brent has a higher than average crime rate - in particular robbery and residential burglary, which are 34% and 22% above the London averages respectively. Nearly one fifth of all crimes in the Borough are committed by Youths aged between 10 and 17. Total crime rates in Brent has decreased by 2.2%.in 2000/1 compared to the previous year. 40% of Brent's domestic properties are in areas rated as deficient in open space. Crime in Brent can range from pick-pocketing to armed robbery of all sorts Brent crime is drastically over the national average. Too much crime is being committed and therefore there is a higher need for crime reduction in Brent. ...read more.

Burglar alarms can be used in any home and can drastically reduce house burglaries if they are set everywhere. So all in all CCTV can reduce crime within public areas, however I feel that this only draws crime away to more secluded areas which could lead to more violent crimes out of range from a CCTV camera such as stabbing. Therefore it only partially meets the local communities' needs. Technology Two: As mentioned before, roadside accidents are highly common around schooling areas and there is a high need throughout the local community. Such technology's that could reduce this are speed cameras. Speed cameras are cameras that are set beside a road that can monitor the speed of cars. If a vehicle is registered going faster than the speed limit set on the camera, it will flash twice and take two pictures of the vehicle. The speed camera can create high resolution images that can clearly show a cars registration and driver inside of the car. Once you are found to be driving over the speed limit of a road you can be fined from 40 to 80 pounds. Speed cameras have been set up at accident 'hot-spots' around Brent which are usually around large and fast roads for around 12 years now. It is effective in making sure that vehicles around Brent aren't speeding around areas of high accident counts; however many of these areas are nowhere near school areas where accident counts are rising. The reason why speed cameras may not be able to be set up near Brent schools is that the roads populating them are rather small and in no danger of taking speeds further than fifty miles per hour - maybe forty even. ...read more.

This means that they should not get lost or go off course and can therefore help the community by reducing the time it takes for each bus to get to each stop. Furthermore less training needs to be given now, therefore more people can be employed meaning higher frequency of buses - a big plus for all people residing in Brent. However, Satellite Navigation can also have its disadvantages. For example the devices are pretty expensive equipment and therefore open for theft by local youths. Therefore, Satellite Navigation could increase crime rates drastically. This could then mean that busses can be vandalised just for these devices also and just backs up the theory of crime rates rising throughout the local community. Also if there is a roadblock, the device can't pick up the details for the length of the road block and could re-route the bus through tight roads as it is programmed to take the shortest alternative route to the next bus stop (this could in the event of a road block be sacrificed to carry out repairs in the piping underground). Therefore, in this scenario, the Satellite Navigation device is useless and the driver is left to make up his own decision in the route he/she will take. Conclusion So in conclusion, the needs of the local community can be effectively met through several technologies, but not 100% efficiently and therefore I've deduced that technology isn't entirely the way forward in ensuring that the local communities' needs are met completely. But for now, technology is the next best thing and I think that those which I outlined are important to this conclusion. ?? ?? ?? ?? ICT Report 3d Haaziq Farook 10o ...read more.