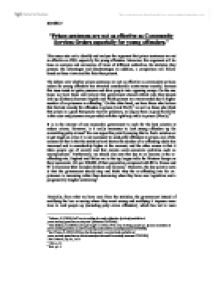 This essay sets out to identify and analyse the argument that prison sentences are not as effective as CSO, especially for young offenders. Moreover, this argument will be base on analysis and evaluation of views of different authorities

what is causing it and trying to redress that".8 In addition, he went on to say that "British sentencing is not getting tough on crime but going soft in the head on crime."9 He might have come to this conclusion because the implemented laws are leading to more crimes being committed. On the whole, if prison sentences were that effective for petty crimes, people would be scared to commit petty crimes and to re-offend, hence the number of prison custodies would decrease considerably and prisons in England and Wales wouldn't be as overcrowded as they are today. Lord Woolf's guidelines issued in 2002 stated "[all people] should go to prison, even if no weapon or personal injury was involved".10 However, the judges and the magistrates refuse to accept those guidelines, and we can say that this is a perfectly good example to show that Jenkins view that judges don't stand up to politicians is a strong inference which ought not to be taken into account.11 Furthermore, we should support the judges' and the magistrates' idea of ignoring those guidelines because they seem rather primitive.12 Moreover, it can ...read more.

In addition, there are some other disadvantages such as offenders usually became jail hardener, they are brutalised while in prison, and as a result many prisoners usually take their own lives because they can't handle being in prison, others are murder or even get ill and die in custody.17Despite all those disadvantages we still see people being arrested for petty crimes. As a result of those incidents that happen in prisons we are forced to agree with Ms Campbell's view that prisons are unsafe places that constantly fails to uphold the duty of care that prison services has to all prisoners,18 as well as Jenkins who believes that British judges are creating a large, criminalised underclass of prisoners and their families in every community.19 In conclusion, after looking at the views and evaluating them, it seems that there were strong arguments supporting CSO as opposed to prison sentences. In addition, statistics seems that CSO shows that less people re-offend and despite tougher laws we still see the number of re-offending rate increasing. Therefore in my view CSO are more effective then prison sentences. ...read more.