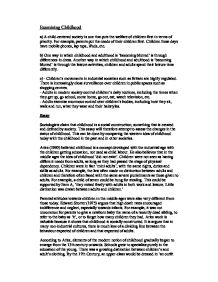 This essay will therefore attempt to assess the changes in the status of childhood. This can be done by comparing the western idea of childhood today with the childhood in the past and in other societies.

Examining Childhood a) A child-centered society is one that puts the welfare of children first in terms of priority. For example, parents put the needs of their children first. Children these days have mobile phones, lap tops, iPods, etc. b) One way in which childhood and adulthood is 'becoming blurred' is through differences in dress. Another way in which childhood and adulthood is 'becoming blurred' is through the leisure activities, children and adults spend their leisure time differently. c) - Children's movements in industrial societies such as Britain are highly regulated. There is increasingly close surveillance over children in public spaces such as shopping centres. - Adults in modern society control children's daily routines, including the times when they get up, go school, come home, go out, eat, watch television, etc. - Adults exercise enormous control over children's bodies, including how they sit, walk and run, what they wear and their hairstyles. Essay Sociologists claim that childhood is a social construction; something that is created and defined by society. ...read more.

For example, it was not uncommon for parents to give a newborn baby the name of a recently dead sibling, to refer to the baby as 'it', or to forget how many children they had. Aries work is valuable because it shows that childhood is socially constructed. It is argues that in many non-industrial cultures, there is much less of a dividing line between the behaviour expected of children and that expected of adults. According to Aries, elements of the modern notion of childhood gradually began to emerge from the 13th century onwards. Schools grew to specialise purely in the education of the young. There was a growing distinction between children's and adult's clothing. By the 17th Century, an upper-class would be dressed in 'an outfit reserved for his own age group, which set him apart from adults'. By the 18th Century, handbooks on childrearing were widely available, a sign of the growing child-centred of family life, at least among the middle classes. According to Aries these developments culminate in the modern 'cult of childhood'. ...read more.

Children also differ from adults through the differences in dress. Neil Postman (1994) says that childhood is a social construction and that it has changed over time. He states that childhood is created by society and culture, and not biology. This could be proven by looking historically at how 'being a child' has changed. In the Middle Ages, childhood was a very different entity and Aries, said that to an extent, 'childhood did not exist', which is stated in Item A. Postman (1994) says that childhood is 'disappearing at a dazzling speed'. He claims that the cause of the disappearance of childhood lies in the rise and fall of the 'print' culture and its replacement by 'television' culture and this has meant that children are being given the same rights as adults, are wearing similar clothing to adults, are taking part in adult activities like smoking and drinking and are committing adult crimes such as murder. These ideas clearly demonstrate that society's need for children to act older than they are is causing trouble emotionally and psychologically for the children. Society is pushing children to behave in a manner that encourages them to take part in activities that are unsuitable for their age group. ?? ?? ?? ?? ...read more.