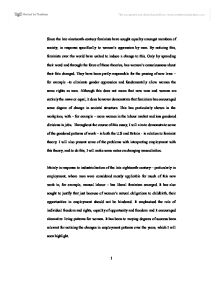 To what extent do feminist theories remain relevant for interpreting gendered patterns of work.

Since the late nineteenth-century feminists have sought equality amongst members of society, in response specifically to women's oppression by men. By noticing this, feminists over the world have united to induce a change to this. Only by spreading their word and through the force of these theories, has women's consciousness about their fate changed. They have been partly responsible for the passing of new laws - for example -to eliminate gender oppression and fundamentally allow women the same rights as men. Although this does not mean that now man and woman are entirely the same or equal, it does however demonstrate that feminism has encouraged some degree of change in societal structure. This has particularly shown in the workplace, with - for example - more women in the labour market and less gendered divisions in jobs. Throughout the course of this essay, I will aim to demonstrate some of the gendered patterns of work - in both the U.S and Britain - in relation to feminist theory. I will also present some of the problems with interpreting employment with this theory, and to do this, I will make some notes on changing masculinities. Mainly in response to industrialisation of the late eighteenth-century - particularly in employment, where men were considered mostly applicable for much of this new work in, for example, manual labour - has liberal feminism emerged. It has also sought to justify that just because of women's natural obligations to childbirth, their opportunities in employment should not be hindered. It emphasised the role of individual freedom and rights, equality of opportunity and freedom and it encouraged alternative living patterns for women. ...read more.

Mary Daly and other radical feminists also discuss the negative effects of patriarchy in constructing and maintaining models for strict 'masculine' and 'feminine' roles. Patriarchy is seen by these feminists as part of society's structure which is a major contributor to women's oppression, due to engrained ideology. Through their combined efforts to uproot patriarchy in society, they have radically pursued the notion of androgyny (Tong, 2008:59). They propose this apparent solution in order that the gender role constraints - which have been engrained into our society - be banished. It is through these proposals and efforts of feminism to uproot the traditional division of labour and patriarchal structures, that much of society's structure has been adapted. By questioning traditional 'masculinities' and 'femininities' in this way and by rethinking patriarchy, the role of the man - in the house, for example - has adapted dramatically in recent years. In general his masculinities have been redirected and he no longer permanently holds the superior position of leader and rule-maker. Thus there is a much more evenly distributed force of power within the household, where women are not solely expected to take responsibility of the household and the children. What now becomes a more likely scenario is a sharing of duties between the man and woman, in both the public and private sphere. Thus, the changing 'masculinities' in the home can be seen as a major contributor in the liberation of women, and subsequently in their ability to work. The accommodation of women into the workforce via part-time work - for example - is a noticeable result of this. ...read more.

This gap suggests that there is still - to this day - many aspects of 'femininity' which are less regarded than 'masculinity'. It demonstrates that male power still dominates largely over women, and that existing structures of patriarchy are still prevalent in our society. Through feminism, many changes in gendered patterns of work can be highlighted. From the late eighteenth-century, it has encouraged women to challenge their place within society, and has encouraged many alternative living patterns, all in search of women's liberation. Many changes that have thus resulted in changing gendered work patterns since the eighteenth-century have been encouraged by feminist theory and its proposals. Notably, these include the increasing number of women in the work force, brought on - for example - through new labour laws, the rise of women in previously male dominated jobs and the trend of women in part-time employment. Betty Friedan to an extent seems correct in saying that the feminist "spark" had been "ignited", "and it spread like a nuclear chain reaction" (Cited in Banner, 1984:247). Although these changes in gendered employment can be seen with relevance to feminist theory, not all gendered patterns of work can be seen in this light, with - for example - the prolonged pattern of more men in the workforce and the reality of the gender pay gap. This represents to some extent an upholding of male patriarchy throughout society as a whole, which due to long engrained ideology, seems difficult to completely uproot. Thus, although feminist theory can be said to be partly responsible for many changes in women's opportunities and changes experienced in the workforce, it seems that there are some areas which will require more than awareness and a questioning of gendered values to be altered completely. ...read more.