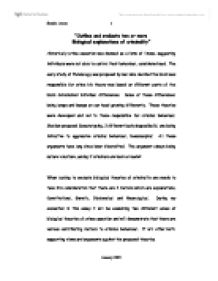 "Outline and evaluate two or more Biological explanations of criminality" Historically crime causation was deemed as a form of illness, suggesting individuals were not able to control their behaviour, considered mad. The early study of Phrenology was proposed by Gall who decided the brain was responsible for crime his theory was based on different parts of the brain determined individual differences. Some of these differences being lumps and bumps on our head growing differently. These theories were developed and led to those responsible for criminal behaviour. Sheldon proposed Somatotyping, 3 different body shapes/build, one being indicative to aggressive criminal behaviour, 'mesomorphs'. All these arguments have long since been discredited. The argument always being nature v nurture, asking if criminals are born or made? When looking to evaluate biological theories of criminality one needs to take into consideration that there are 4 factors which are explanations, Constitutional, Genetic, Biochemical and Neurological. During my evaluation in this essay I will be examining two different areas of biological theories of crime causation and will demonstrate that there are various contributing factors to criminal behaviour. It will offer both supporting views and arguments against the proposed theories. The two biological theories chosen to be explained are twin studies from the Genetic factor and nutrition from the Biochemical factor. Genetic factors cover 3 areas, twin studies, adoption and the criminal gene. Twin studies have been investigated to establish whether the influence of heredity (nature) ...read more.

job therefore needing to earn money by way of crime, social background of each twin should they have been separated, or if twins are not separated is crime due to genetic makeup or proximity of environment the time in which they spent with their biological parents. We need to realise that it does not take two twins to commit a crime as with any criminals they interact and recruit others, a twin also maybe more likely to manipulate others because of the fact of being a twin. A relationship with any criminal is likely to shape thoughts and actions leading to crime. This I believe is why one sibling is more likely to follow the other into a life of crime, not necessarily a following of a particular gene more likely to be influenced by environment and peer groups and pressure. A more conclusive way of conducting this experiment would be if the MZ twins were separated at birth and 1 brought up in a totally different social background, this would offer additional control to the experiment therefore getting closer to the facts as to the genetic predisposition of crime. When considering twin studies to establish a relationship with crime and as to whether it is an inherited gene, identical twins should show a 100% trend concordant with their behaviour (Clark 2007 class notes) therefore it is not conclusive to say that criminality is just because of a particular gene, however acknowledgement needs to be given to the contribution this gene gives to criminality with a strong influence of environment. ...read more.

Even though the data is conclusive on the value of nutrition, in UK prisons, Doctors, scientists, psychologists, prison authorities and politicians do not acknowledge it, they make excuses about the lack of evidence and also the cost involved in implementing nutritional programmes. The change in nutrition has been proven to cut re-offending rates so changing diet would be more cost effective than ASBOs, which are not seeing changes in behaviour. Diet needs to be seen as something we can influence and should not be underestimated even at this stage. It is true to say that we have come a long way from the lumps and bumps on our head and our body shape being an indicator of our criminality, but we are still a long way from working out what really causes someone to turn to crime. It seems that neither Biochemical nor Genetic factors can be studied alone, and noted that attention needs to be given to the interaction of behavioural changes, environment and the psychological characteristics of the individual. (K. Williams 2004) there are so many variables, each criminal having their own individual package/makeup for crime causation. It may be that in time there will be another factor that depicts the main reasons and gives us the explanation we are looking for. The worrying thing has to be when we do feel we have found the cause, what are we going to be able to do, incarcerate possible offenders, change the chemical balance of high risk individuals and anticipate offences, worrying thoughts. (K. ...read more.