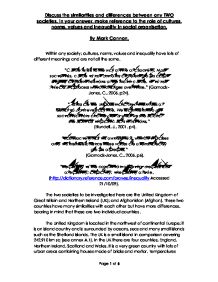 Within any society; cultures, norms, values and inequality have lots of different meanings and are not all the same. "Culture refers to the way of life of a society. Most societies, culture is not uniform; different groups adopt slightly different versions of the main culture, it is not fixed but a process which changes over time." (Garnock-Jones, C., 2006. p24). "Norms are the unspoken and unwritten rules of behaviour in everyday life. We learn them through socialisation, and they tell us what we should and shouldn't do in particular situations." (Blundell, J., 2001. p4). "Each society has its own beliefs, which it passes onto its members; hence these values are often shared by groups of people." (Garnock-Jones, C., 2006. p6). "Inequality is the condition of being unequal; lack of equality; disparity; inequality of size. (http://dictionary.reference.com/browse/inequality Accessed 21/10/09). The two societies to be investigated here are the United Kingdom of Great Britain and Northern Ireland (UK); and Afghanistan (Afghan). ...read more.

The ethnic groups are a mixture of White (English, Welsh, Scottish and Irish), Black, Indian, Pakistani and mixed races. In Afghanistan the countries people are predominantly Muslim (Sunni or Shia) with the ethnic groups of Pashtun, Tajik, Hazara, Uzbek, Aimak, Turkmen and Baloch. There is a similarity here that Muslims live in both the UK and Afghanistan, no matter where they are, they will still pray five times a day facing Mecca in Saudi Arabia. Muslims also have Ramadan, this is in the ninth month of the year and last for thirty days, Muslims will not eat, drink, smoke, make love etc in the daylight hours. Christians however congregate on Sunday mornings this is also known as Sabbath (holy day of rest) where the congregation will sing hymns, have prayers, be taught through sermons, have a communion and have a collection or offering. The birth rate in the United Kingdom is low compared to that in Afghanistan. ...read more.

In the UK the maternity facilities are excellent. In Afghanistan there is only one female gynaecologist who is based in Lashkar Gah; many families don't have the privilege to travel there so choose to have home births without any medical personnel being present. Although the UK is the smaller of the two countries, it has a larger population. The World Guide 2005/2006 states the population in the UK is 59,598,039 of this 50% of the population work for a living. Afghanistan is the larger country but only has a population of 25,971,254 of this 41.8% are in employment. In the UK woman are seen as equals in employment where as in Afghanistan females don't have the same equality, this is because Afghan males don't see them as equal. In conclusion the United Kingdom is a highly populated and well maintained small island situated in the northwest of continental Europe. It has good health and education prospects where as Afghanistan is a large sandy country with not as good infrastructure as the UK, the country is heavily dependent on international funds for education and medical facilities. ...read more.