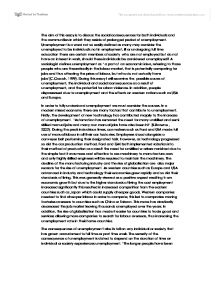 The aim of this essay is to discuss the social consequences for both individuals and the communities in which they reside of prolonged period of unemployment. Unemployment is a word not so easily defined as many may consider the unemployed to be individuals not in employment, ill or undergoing full time education there are certain members of society who are not employed but do not have an interest in work, should these individuals be considered unemployed? A sociologist defines unemployment as ' a part of an economic idea, referring to those people who are theoretically in the labour market, that is potentially competing for jobs and thus affecting the price of labour, but who do not actually have jobs'(C.Crouch, 1999). During this essay I will examine the possible cause of unemployment, the individual and social consequence as a result of unemployment, and the potential for urban violence. In addition, people dispossessed due to unemployment and the effects on western nations such as USA and Europe. In order to fully understand unemployment we must consider the causes. In a modern mixed economy there are many factors that contribute to unemployment. Firstly, the development of new technology has contributed majorly to the increase of unemployment. 'Automation has removed the need for many unskilled and semi skilled manual jobs and many non manual jobs have also been hit' (K.Browne , 2002). ...read more.

Individuals may remain hopeful in their search for a job for months but as time goes by they begin to become sceptical and may become demoralized. The amount of time an individual remains hopeful depends on their character, personality and amount of support they receive from friends or family. In addition, 'More ill health and depression brought on by a poorer diet, stress, and despair arising from the loss of routine and a sense of purpose'(K.Browne, 2002). The cost of living a healthy life becomes high when unemployed. People with less income begin to purchase inferior goods such as Morrison value products. These goods are cheap but lack quality. Work provides people with a sense of achievement and purpose. People who are made redundant tend to feel a loss of identity and status and this has a negative effect on their self confidence and may lead to despair. Society from my perspective tends to experience a wider range of consequences resulting from unemployment. The local economy of any society will face decline as unemployment increases. As people have less disposable income they begin to decrease their living cost. This may be done by purchasing cheaper food, less luxury goods or no meals out. As a result of this local shops and restaurants will have less income coming in due to less customers and in response have to make cut backs in order to survive. ...read more.