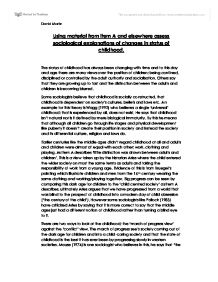 Using material from item A and elsewhere assess sociological explanations of changes in status of childhood.

Using material from item A and elsewhere assess sociological explanations of changes in status of childhood. The status of childhood has always been changing with time and to this day and age there are many views over the position of children; being confined, disciplined or controlled by the adult authority and socialisation. Others say that they are growing up to fast and the distinction between the adults and children is becoming blurred. Some sociologists believe that childhood is socially constructed, that childhood is dependent on society's cultures, beliefs and laws etc. An example for this theory is Wagg (1992) who believes a single 'universal' childhood; that is experienced by all, does not exist. He says that childhood isn't natural nor is it defined by mere biological immaturity. By this he means that although all children go through life stages and physical development like puberty it doesn't create their position in society and instead the society and its differential culture, religion and laws do. ...read more.

There are two ways to look at the childhood; the 'march of progress view' against the 'conflict' view. The march of progress see's society coming out of the dark age for children and into a child-caring society and that the state of childhood is the best it has ever been by progressing slowly in western societies. Mause (1974) is one sociologist who believes in this, he says that 'the further back in history one goes, the lower the level of childcare, and the more likely children are to be killed, abandoned, beaten, terrorised and s******y abused'. This strongly agrees with the march of progress view of gradual childhood improvement towards recent societies where infant mortality has decreased, more government organisations for children and overall more cared for and valued. However the march of progress view is deeply argued by the 'conflict view' that perceives society based on a conflict between different social groups such as social classes or genders. They criticise the march of progress in two ways, that there are inequalities among children in terms of the opportunities and risks they come ...read more.

unrestrained media viewing that displays violence, s*x etc to the easy manipulated minds of children. However Postman can be seen to be focusing too much on specific factors like television at the expense of other important factors like the advancement of living standard and changes in law; all in which may well contribute to the 'disappearance of childhood'. Also Opie (1993) argues that the disappearance of childhood is not occurring, through the study of children's games, rhymes and songs she argues there is a strong line present between adults and children and that Postman's theory that children's unsupervised games are dying out is not true through studies that conclude children's ability to create their own independent culture; separate from adults. To conclude, the status and position of children will forever change and probably follow the society and its rules, laws, socialisations and beliefs; there is strongly weighted evidence that society's childhood has improved from the historic suffering of children to modern child acknowledgment and care. Sociologists will continue the study of the childhood state in the future to identify any issues within society and its socialisation; ultimately benefiting the children who belong to the society. ?? ?? ?? ?? David Martin ...read more.