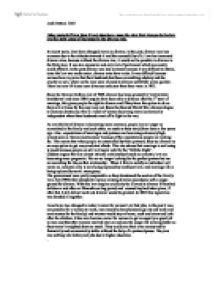 Using material from Item B and elsewhere, asses the view that changes in the law are the main cause of increases in the divorce rate.

Using material from Item B and elsewhere, asses the view that changes in the law are the main cause of increases in the divorce rate. In recent years, laws have changed views on divorce. In the past, divorce was less common due to the attitudes towards it and the accessibility of it. Law has increased divorce rates, because without the divorce law, it would not be possible to divorce in the first place. It was too expensive and only Act of parliament which was costly could afford it. In the past divorce was less common because it was difficult to obtain, since the law was made easier, divorce rates have raisin. It was difficult because women have to prove that their husbands had been committing adultery and the cruelty as well, where as the men were allowed to divorce unfaithful wives quicker. There are now 50 times more divorces each year then there were in 1921. ...read more.

This also shows that marriage is not losing is touch because people are still willing to look for the 'Mr/Mrs Right'. Giddens argues that our closest intimate relationships based on romantic love are becoming more pragmatic. We are no longer looking for the perfect partner but we are searching for the perfect relationship. When it fails to satisfy an individual will move on, romantic love is now being replaced by confluent love, and marriage life is being replaced by serial monogamy. The government were partly responsible as they abandoned the section of the Family Law Act (1996) that intended to replace existing divorce procedures with a single ground for divorce. With this law couples could only be allowed to divorce if they had children a and after an 18month cooling period and counselling had taken place, if after that it still did not work out divorce would be granted. ...read more.

As a result of churches not allowing these marriages, many people stopped going to church, the church then lost community members and later then allowed divorced people to re-marry because of the negative response they were getting. When making decisions about divorce many people would not look at religious beliefs for this particular reason because they felt they were not being supported in any way, as they would decline when trying to sort out problems. Although the law is to blame for the increase in divorce it is not to be the full cause of divorce as many other factors also play a part in why people do divorce such as standards being to high, people rushing into marriage and social attitudes. As laws have begun to change so have people attitudes towards divorce, as society as a whole, divorce is becoming more socially acceptable because it is now very common and likely to be experienced by many or even witnesses. Many people's religious beliefs have begun to decrease due to the bad image religion gives to divorce. Janki Dattani 12E3 ...read more.