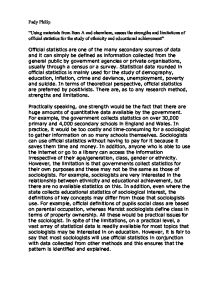 Using materials from Item A and elsewhere, assess the strengths and limitations of official statistics for the study of ethnicity and educational achievement

Fady Philip "Using materials from Item A and elsewhere, assess the strengths and limitations of official statistics for the study of ethnicity and educational achievement" Official statistics are one of the many secondary sources of data and it can simply be defined as information collected from the general public by government agencies or private organisations, usually through a census or a survey. Statistical data rounded in official statistics is mainly used for the study of demography, education, inflation, crime and deviance, unemployment, poverty and suicide. In terms of theoretical perspective, official statistics are preferred by positivists. There are, as to any research method, strengths and limitations. Practically speaking, one strength would be the fact that there are huge amounts of quantitative data available by the government. For example, the government collects statistics on over 30,000 primary and 4,000 secondary schools in England and Wales. In practice, it would be too costly and time-consuming for a sociologist to gather information on so many schools themselves. Sociologists can use official statistics without having to pay for it because it saves them time and money. ...read more.

Also, because educational statistics are collected at regular and frequent intervals, sociologists can make comparisons over time. For example, annually gathered exam statistics enable the sociologist to see trends in results. Sociologists can then analyse cause and effect relationships. However, the limitation is that governments may change the definitions and categories. For example, when the Conservatives first introduced league tables of school performance in 1988, a school's position was based purely on its exam results. This generally meant that schools with middle-class pupils were placed higher than those with working-class intakes. Another strength would be the fact that some official statistics on education are highly representative. For example, all state schools have to complete a school census three times a year. This collects information on pupils' attendance, ethnicity and gender, the numbers receiving free school means and so on. Because these statistics cover virtually every pupil in the country, they are highly representative, and would give the sociologist generalised information that he needs on the educational performance of ethnic groups. Another strength would be that because the government provides huge amounts of accurate quantitative data about nearly every primary and secondary school in England and Wales, the data is therefore likely to be valid. ...read more.

The limitation is that the sociologist may discover statistical errors that may spoil the pattern he or she has discovered. In addition, if the sociologist draws attention to the failures or underachievement of a type of ethnic student, he or she may generate a self-fulfilling prophecy of future failure. Theoretically speaking, the strengths are that it is very straightforward to repeat the research to verify the accuracy of the original study. In addition, official statistics produce a large amount of evidence that can be used to justify any number of links that relate to education such as gender and subject choice or participation rates in a-levels. The limitations are that official statistics produce a very flat and simple picture of the topic that fails to reflect how the group experiences the problem under investigation. In addition, official statistics are socially constructed and are often designed to suit the needs of politicians rather than accurately measure a trend. Overall, having looked at practical, ethical and theoretical considerations in relation to official statistics, its clear that they would be more preferred by positivists and not subjectivists. The factor that ultimately will determine if official statistics are used is practical concerns. The sociologist must make sure that his research would not reflect negatively on ethnic groups in education. ...read more.