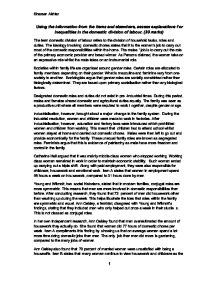 Using the information from the items and elsewhere, assess explanations for inequalities in the domestic division of labour.

Using the information from the items and elsewhere, assess explanations for inequalities in the domestic division of labour. (20 marks)

The term domestic division of labour refers to the division of household tasks, roles and duties. The ideology involving domestic chores states that it is the women’s job to carry out most of the domestic responsibilities within the home. The males’ job is to carry out the role of the primary economic provider and bread winner. As Parsons claimed, the women take on an expressive role whilst the male takes on an instrumental role.

Societies within family life are organised around gender roles. Certain roles are allocated to family members depending on their gender. What is masculine and feminine vary from one society to another.  Sociologists argue that gender roles are socially constricted rather than biologically determined. They are based upon primary socialisation rather than any biological factors.

Designated domestic roles and duties did not exist in pre-industrial times. During this period, males and females shared domestic and agricultural duties equally. The family was seen as a productive unit where all members were required to work together, despite gender or age.

Industrialisation, however, brought about a major change to the family system. During the industrial revolution, women and children were made to work in factories. After Industrialisation, however, education and factory laws were introduced which prohibited women and children from working. This meant that children had to attend school whilst women stayed at home and carried out domestic chores. Males were then left to go out and provide economically for the family. These unequal family roles are known as segregated roles. Feminists argue that this is evidence of patriarchy as male have more freedom and control in the family.

Catherine Hall argued that it was mainly middle class women who stopped working. Working class women remained in work in order to maintain economic stability. Such women ended up carrying out a triple shift. Along with paid employment, they were also responsible for childcare, housework and emotional work. Item A states that women in employment spend 56 hours a week on housework, compared to 31 hours done by men.

Young and Wilmott, two social historians, stated that in modern families, conjugal roles are more symmetric. This means that men are more involved in domestic responsibilities then before. After conducting research, they found that 72 percent of men did housework other than washing up during the week. This helps illustrate the idea that roles within the family are symmetric and equal. Ann Oakley, a feminist, disagreed with Young and Wilmott’s findings, stating that they included men who only helped out once a week in their studies. This is not classed as conjugal roles.

In her own independent research, Ann Oakley found that men overestimated the amount of housework they actually do. She found that women did 77 hours of domestic chores per week. Item A compliments this finding by showing us that on average women spend a lot more time doing domestic jobs than men. The only job then men did more is gardening, compared to the many jobs of women.

Ann Oakley also found that 70 percent of married women were unsatisfied with being a housewife. Item B states that many women continue to view housework and childcare as the basic qualities of a ‘good wife and mother’. These are the women who are most likely to be dissatisfied with the housewife role.

Ann Oakley found that men were more likely to help out with childcare than any other domestic responsibility. Item C supports this claim by recognizing that fathers play an active role in the emotional side of parenting. The amount of time that fathers spent with children has increased four-fold in just over 30 years. Ferri and Smith contradicted this view with the claim that men did less than four percent of childcare.

Many sociologists, such as Connell, stated that as times have moved on, we have come to see the emergence of the ‘new man’. Until recently, men were socialized into hegemonic masculinity. They were expected to play the role of bread winner and financial providers. This masculinity has experienced change as many men now believe that they should have equal share in domestic responsibilities as women. It is still however women who carry out most the domestic jobs. From this it could be stated that the idea of the new man is just an illusion designed to favour men and keep women under the impression that their spouse is actually helping around the house. Item B also states that the unequal division of labour only exists as it benefits men who are reluctant to change it.

Despite the emergence of the new man, decision making is still dominantly the males’ job. Edgell studied middle class couples and found that major decisions were made by the male. Women dominated the minor decision making sections such as decorating, domestic spending and children’s clothing.

Overall, there are many studies and factors which suggest that there is a massive inequality in the domestic division of labour. Women generally carry out more domestic chores then men. Nowadays, however, men are contributing more towards domestic chores then before. This is supported by the march of progress view taken by Young and Wilmott. This means that things are slowly changing, with more and more men helping their female spouses with domestic errands.