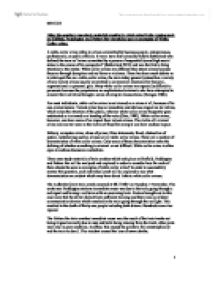 Using the seminar case study material consider to what extent train crashes such as Hatfield, Paddington and Potters Bar should be seen as examples of White Collar crime.

Using the seminar case study material consider to what extent train crashes such as Hatfield, Paddington and Potters Bar should be seen as examples of White Collar crime. A white-collar crime refers to crimes committed by business people, entrepreneurs, professionals, or public officials. It was a term first coined by Edwin Sutherland who defined the term as "crime committed by a person of respectability and high social status in the course of his occupation" (Sutherland 1974) and was the first to bring attention to the matter. White-collar crimes are different then street crimes because they are through deception and not force or violence. There has been much debate as to what qualifies as a white-collar crime, the term today generally describes a variety of non-violent crimes usually committed in commercial situations for financial, organisational or personal gain. Many white-collar crimes are especially difficult to prosecute because the perpetrators are sophisticated criminals who have attempted to conceal their activities through a series of complex transactions. (Bologna 1984). For most individuals, white-collar crime is not viewed as a crime at all, because of its non-violent nature. Violent crime has an immediate and obvious impact on its victims, which raises the attention of the public, whereas white-collar crime frequently goes undetected or is viewed as a bending of the rules (Geis, 1982). ...read more.

It is much harder to perceive whose criminality resulted in the crashes. There are a numbers of players whose direct actions have a part in the incidents that have happened. If the crashes are indeed White Collar crimes then whose criminality is it? In Potters Bar, the crash was due to poor maintenance as nuts and bolts were missing. This is someone's criminality but whose? The tracks have clearly not been perfected resulting in a loss of life. Railway companies contract out to private companies such as Thames and Railtracks who carry out track inspections and maintenance. There's a lot of input from different directions, this results in a huge confusion of responsibility and accountability. Systematic problems therefore arise, it can be seen that the train companies are not responsible due to companies like Railtracks who are supposedly maintaining tracks and points are over and over again not doing very well and getting reprimanded. There is a behaviour that keeps repeating itself which shows an element of criminality on their behalf. In Ladbroke Grove, there are also a number of people who may be perceived to have a shared responsibility in the crashes. The driver went through red light, there was poor communication with the man at signal box and there is a pre history to it all in terms of the training received by the driver. ...read more.

As discussed, it is hard to determine who should be punished for the crashes as there has been input from a wide area. It is also clear that there are many underlying reasons behind the faults that led to the crashes. When taking a legal perspective the offences cannot be a direct action of corporate manslaughter as a senior manager director has not been held responsible for making a key decision which has directly led to the crashes under this current law. Therefore a prosecution cannot be made for this. When taking a global perspective at the situation as a whole. It is clear that train company's are under increased pressure to perform. They are also in competition with other companies in terms of speed, efficiency and profits. This may be the reason for the corners that have been cut, which have been done to satisfy the businesses needs and to please members of the general public who want fast, but cheap transportation. This brings me to the conclusion that the crashes are not immediate forms of White Collar crimes again because the intent to harm these people was not there. The crashes are based on accidents. Yes, they could have been prevented if a little more effort and guidance was put into the training of staff and the inspections carried out but I do not think that punishment in terms of prosecution is the answer to these incidents. ...read more.