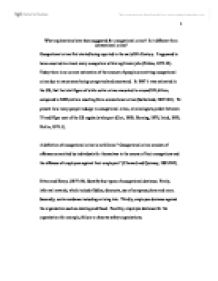 What explanations have been suggested for occupational crime? Is it different from conventional crime?

What explanations have been suggested for occupational crime? Is it different from conventional crime? Occupational crime first started being reported in the early19th Century. It appeared to have occurred in almost every occupation within legitimate jobs (Tobias, 1972:10). Today there is no correct estimation of the amount of people committing occupational crime due to many cases being unreported and uncovered. In 1967 it was estimated in the US, that the total figure of white collar crime amounted to around $21,billion, compared to $600,million resulting from conventional crime (Sutherland, 1967:194). To present how many people indulge in occupational crime, criminologists predict between 75 and 92per cent of the US regularly take part (Cort, 1959; Horning, 1970; Laird, 1950; Zeitlin, 1971:1). A definition of occupational crime is as follows:" Occupational crime consists of offences committed by individuals for themselves in the course of their occupations and the offences of employees against their employers" (Clinnard and Quinney, 1995:385). Ditton and Henry, (1977:56). Identify four types of occupational deviance. Firstly, informal rewards, which include fiddles, discounts, use of company phone and more. Secondly, work avoidance including arriving late. Thirdly, employee deviance against the organisation such as stealing and fraud. Fourthly, employee deviance for the organisation for example, failure to observe safety organisations. Occupational crime is therefore committed by normal people who have jobs. It can be committed on your own, or in groups. It is a very widespread activity. Occupational crime is committed for personal gain. The theories behind this will now be explored. Control theories propose that it is in human nature to commit. It is in our natural tendency unless otherwise restrained. Control Theories believes "Individuals commit crime because of the weakness of forces restraining them from doing so, not because of the strength of forces driving them to do so."(Vold & Bernard, 1986:84). Control theories can be traced to deviant backgrounds or if there is a physical opportunity available. The theory believes that anyone will steal if given the chance, (Lipman 1973, McCullough, 1981:66)". ...read more.

Employers may be forced into fiddling by their managers, striving to be the best or just to be part of a group. Occupational crime may be committed to keep the business working smoothly and the employees happy. Another reason is due to boredom in the workplace, a task which is fun to do as well as hitting back at managers." Mars assumes that all occupations of a similar type, are of the same group and grid strength" (Rayner, 1979:38). It would be possible that many occupations that fit into these groups do not fiddle for those reasons. Mars has no explanations for employees stealing to personally earn money. Mars also gives the impression that you wouldn't be able to hold down certain jobs if you didn't fiddle. Sutherland has introduced a theory known as Sutherlands Theory. Sutherland proposes that criminal behaviour is learned through interaction with other criminals. For instance, if one was to work with none criminals, then criminality would not result. The offender learns crime through communication with other criminals. He is taught the techniques of committing the crime and comes to understand the motives and attitudes behind it. The other criminals "transmit an excess of values that promote illegal behaviour" (Sutherland, 1974:71). Evidence to support this theory is provided by Klockars (1974:208). Klockars found from interviewing a professional dealer in stolen goods that, employers teach their employers how to fiddle. The dealer quoted "oh I school my drivers; show' em how to go about doin' things, you know". Sutherland's theory would apply to some cases, particularly those in which other criminal employees intend to teach other employees, however many employers work with criminals who understand their techniques yet refuse to disengage. The theory doesn't explain why the behaviour wants to be learned. It may be a case of if all the other employers can get away with it then so can I, so teach me how. ...read more.